Our erstwhile News and Reviews Editor, Alex Wood, returns to TheatreBubble with a list of his 2017 theatrical faves.

It’s been a busy 2017 – so much so that last week I started compiling a list of everything I’d seen for fear of simply forgetting a load of them.

The total ran to 143, predominantly in London but of course with further shows in Chichester, Birmingham and a solid 25 in Edinburgh. As the winter break continues, I thought it’d be worth compiling my favourites into a list of 10 (though no prizes for guessing the number 1) and explaining why they stayed with me. A lot of them have been somewhere else before this year – apologies in advance for taking such a long time to get on the bandwagon.

10. All We Ever Wanted Was Everything – Summerhall Roundabout 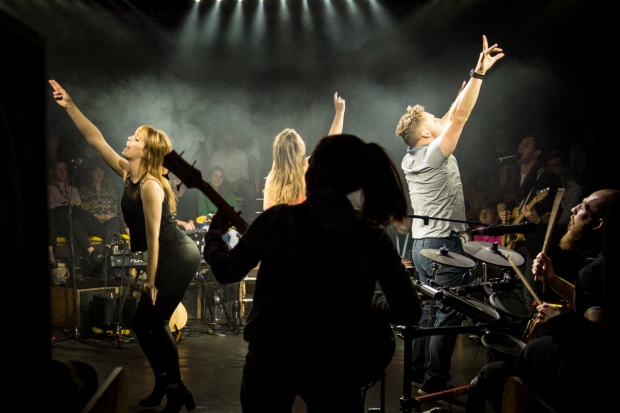 Summerhall’s Roundabout had a hit-and-miss year at the Edinburgh Fringe, but this stood out for me as a well-executed, seismic piece of gig theatre, rocking between the infinite and the intimate, the cosmos and the club in the city centre. Luke Barnes creates a lyricism out of everyone’s lives, rounded out with an ending full of bite. Exquisite cast too. 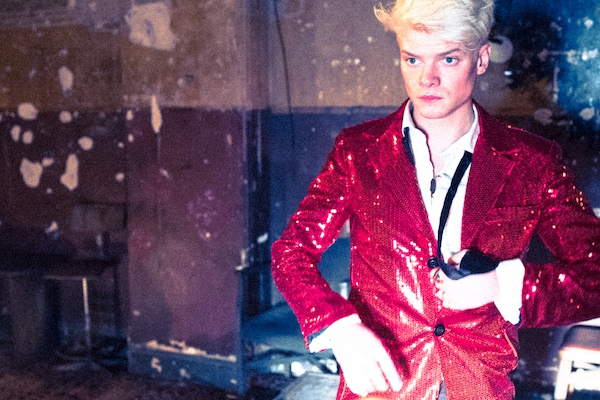 I remember getting a press release saying Jamie Lloyd would be directing a site-specific version of Philip Ridley’s The Pitchfork Disney, and brimming with excitement. The excitement was well-placed – the show was brash, physical, uncompromising and just generally a bit terrifying, all in a cramped basement space. My plus one had to sit on a chest of drawers. It may not have been the best crafted, but it made up for it with its raw energy. 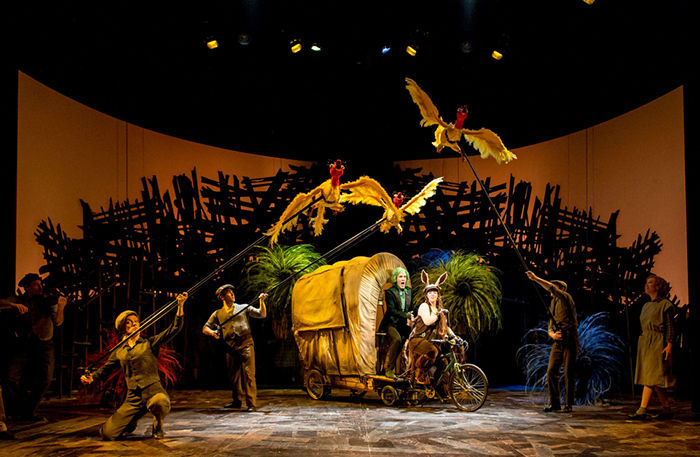 My first five-star review at WhatsOnStage, I didn’t catch the show on its first outing but, in a period of a series of rampant governments tearing apart environmental policy, it felt all the more pressing. I’ve been seeing a lot of children’s theatre for the site but nothing ever lived up to the glory and the visual feast of The Lorax, while the humour stayed with me. Solid soundtrack too. 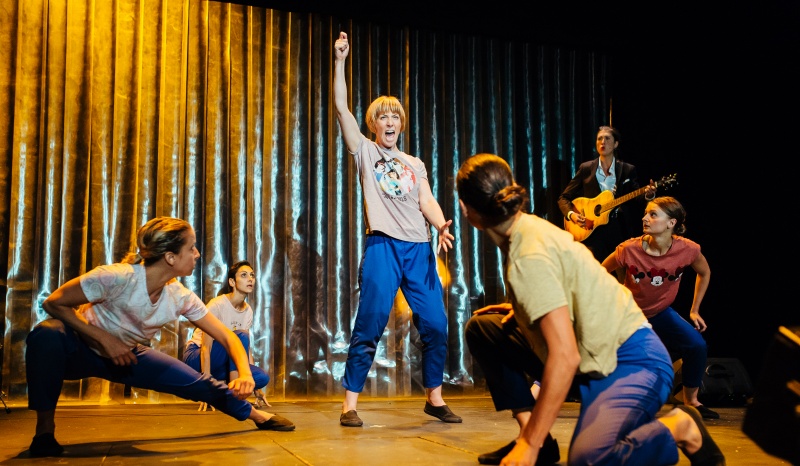 Another show that gained a lot of significance as the year went on, Bucket List was a blistering dissection of our notions of protest, and our perception of inequality, delivered with a well-tuned coherency by an all-female cast. It gathered a lot of hype post-Edinburgh, so to catch it during a London run was a treat.

6. Our Ladies of Perpetual Succour – Duke of York’s 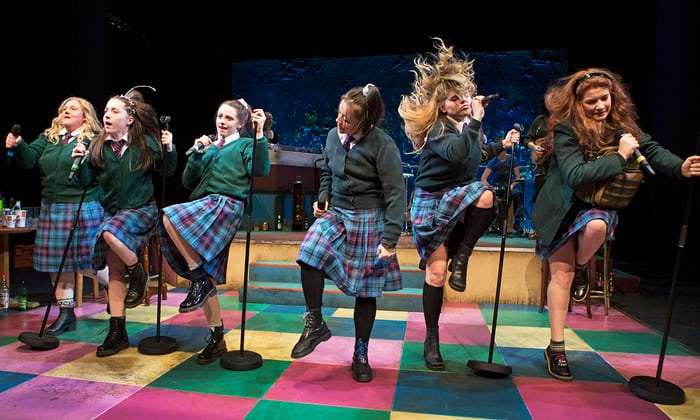 One of the numerous instances (none least on this very list) where I was very late to the party – this time with the wonderfully vibrant Our Ladies, which was given a well-deserved West End run after spells in Edinburgh and at the National. The tale of the Scottish school girls has enough heart and blunt humour to fill a 90-minute session with ease. My huge fondness for ELO certainly helped. Hopefully, it won’t be out of the public eye for too long, as it all works so splendidly. 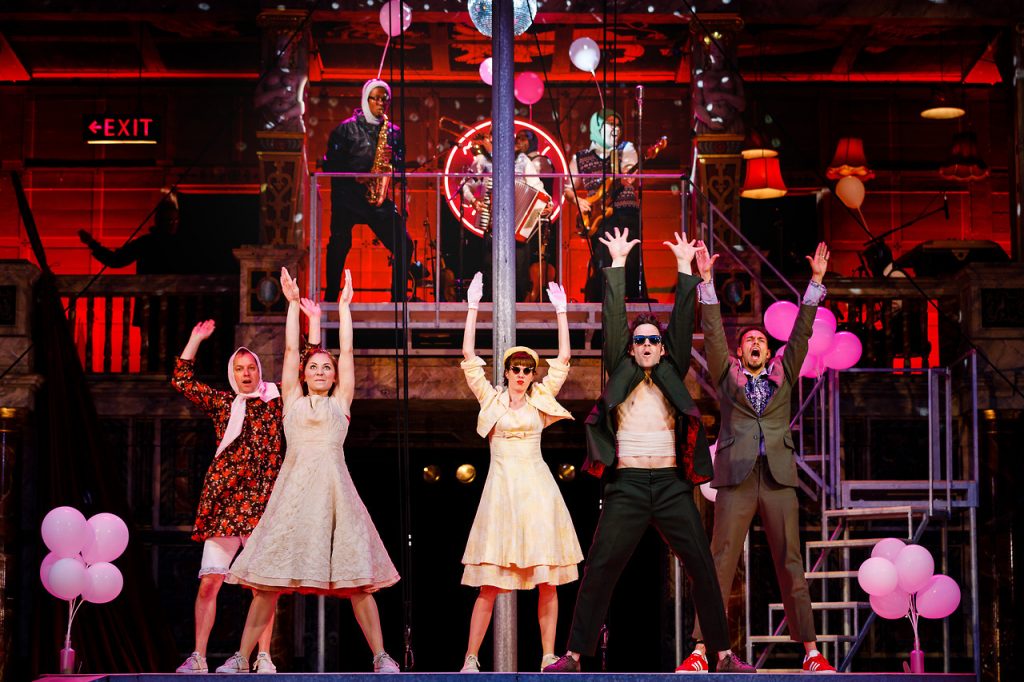 It was, for the most part, a solid season at the Globe for Emma Rice, making her departure all the more pertinent. Like the beginning of a romantic affair that we never saw blossom into a long-term partnership. While I adored Much Ado and Twelfth Night, it was Tristan and Yseult that pulled at my heartstrings and left a lasting, loving impression. Niall Ashdown was scene-stealing as Brangian, while the show’s musicals numbers made for the perfect post-interval boogy. A perfect revival for the Summer of Love. Will be interesting to see where Michelle Terry heads come 4 January.

4. Juan Vesuvius: I Am Your Deejay – Assembly George Square 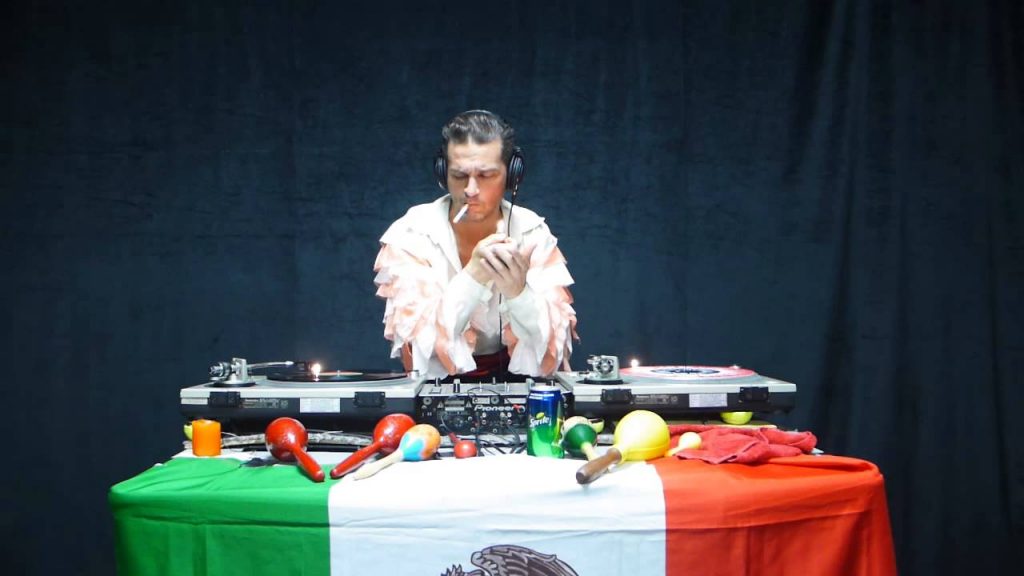 Spontaneously deciding to see a show at 11 pm at the Edinburgh Fringe can either be a hit or miss affair, but in this case, it very much paid off. Juan Vesuvius, the creation of clown Barnie Duncan, mixes in-situ DJing, discourse on hatred and persecution as well as a diatribe against the modern state of music. But more than all this didacticism on the decks, the show was fundamentally funny. Perhaps even my funniest Fringe experience of 2017. Hopefully, the show will come back for an encore in the new year. 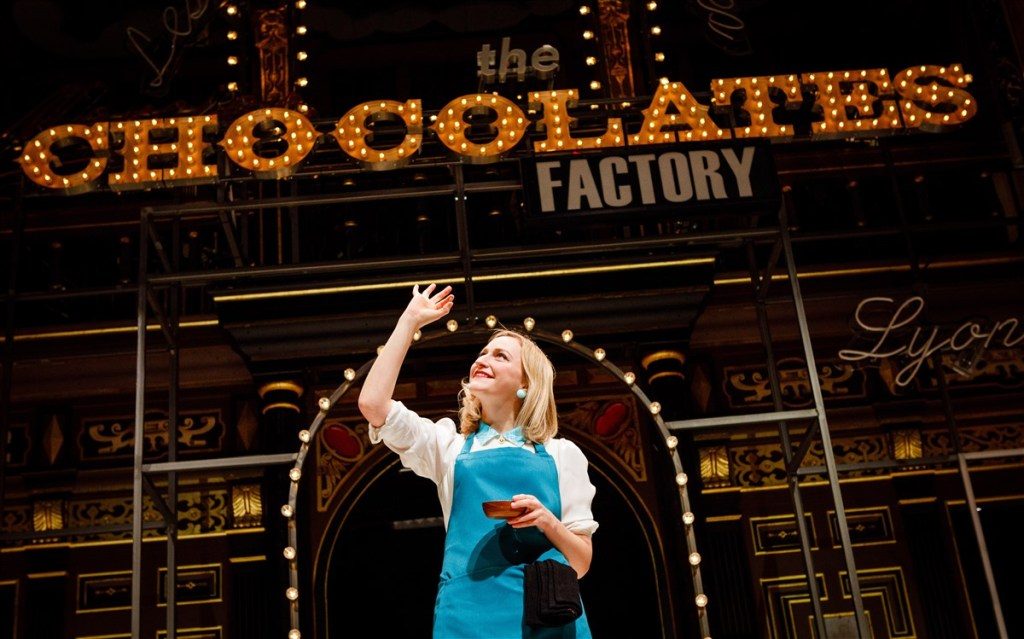 Quelle Surprise! What a joyful way to see out 2017 and Emma Rice’s final season at Shakespeare’s Globe. A new musical based on the French film Les Emotifs Anonymes, the show takes a fairytale Richard Curtis-romance and infuses it with discussions on anxiety and mental health. Plus some amazing comedic turns from the likes of Gareth Snook and Marc Antolin. Carly Bawden hit all the right notes as our flawed protagonist, while Dominic Marsh books in his second spot on the top 10. 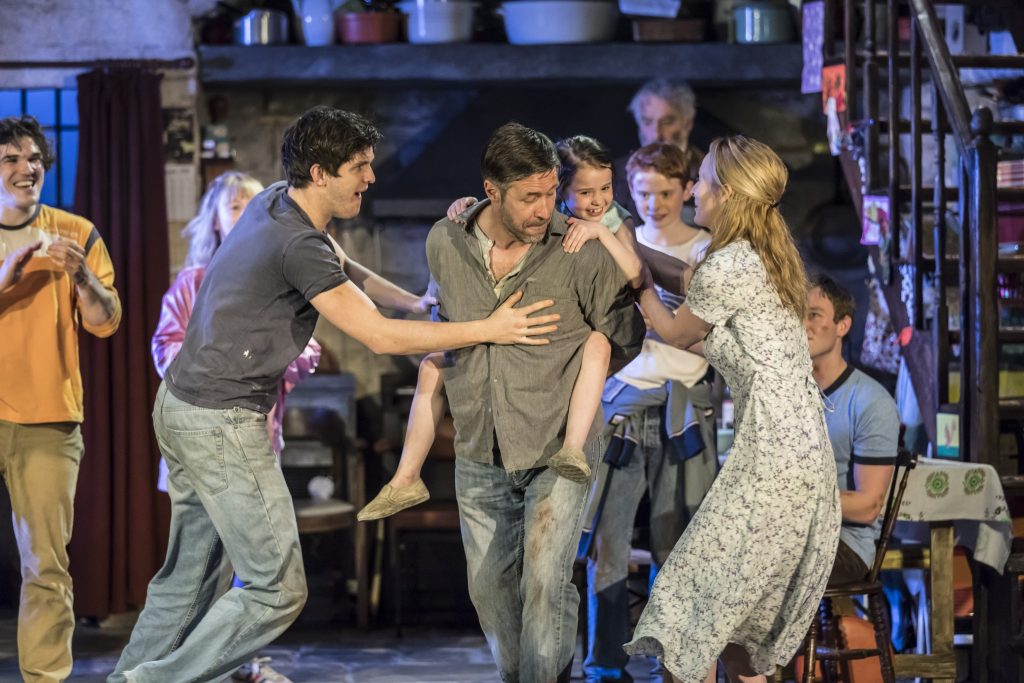 I got a chance to see The Ferryman just before the original cast left, which was a lucky strike. Laura Donnelly stood out among a solid ensemble, Tom Glynn-Carney excited, but it was Butterworth that was the star of his own show in a piece that coiled and coiled around itself until, when it was at its tightest, it sprang back into anarchy. The exciting news for 2018 was the announcement that Rosalie Craig will be in the show come the new year – a chance to return and see it all again. 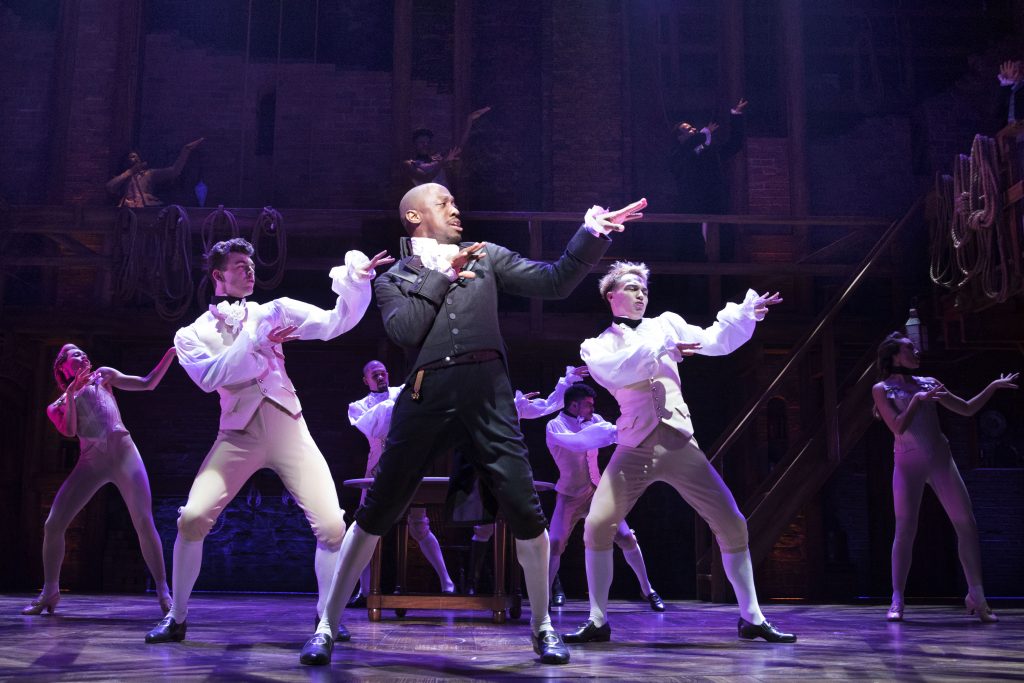 Sigh, it had to go somewhere, didn’t it? And I was bristling with excitement seeing the show, watching Miranda address the audience and everyone explode into a standing ovation. But beyond that to simply mouth along to the lyrics and watch Andy Blankenbuehler’s choreography for the first time was spellbinding. The musical, while perhaps not imbuing the same degree of national pride as does in the States, was as culturally powerful as any would have anticipated. The cast was largely on the mark too, though stand out performances must have been Obioma Ugoala and Tarinn Callender. Giles Terera’s Room Where It Happened was also an unexpectedly memorable number, considering how it rarely ranks among the best on the cast recording.