Actress Yasmin Paige is well known for her roles in Submarine, The Sarah Jane Adventures and Pramface. This summer she is appearing opposite Simon Manyonda in the European premiere of Actually by Anna Ziegler at the Trafalgar studios. 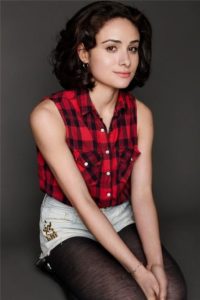 You’re appearing in Actually at the Trafalgar studios, can you tell us what the play is about?

The play is about two university students who hook up after a party and the subsequent events of that evening. Actually is about consent and the title 9 hearings that happen across US universities but it is also deeply about human vulnerability and how we interact.

And what drew you to the character of Amber?

Amber is someone who is a deep thinker and very empathetic. She is on a quest for self knowledge. The journey between her and Tom is so moving and it’s so human in that it is layered with all the flaws, pitfalls, fears and miscommunication that takes place within yourself and with others. That is why I really wanted to be a part of telling this story. 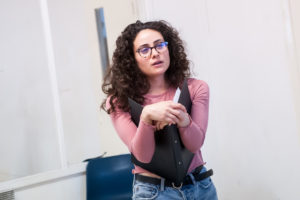 You have been an professional actor since childhood, how did you start out?

I started out doing Saturday classes and then progressed from there. My older brother is an actor and writer so I followed him really. He did classes first and introduced me to Al Pacino who was the catalyst for me wanting to become an actor.

You have a fascinating mix of heritages, do you think that has helped you play such a diverse selection of characters?

Being of Egyptian and Russian decent while also being born and bred in the UK has meant that I have grown up with a mixture of cultures and identities. It has made me aware of differences but ultimately much more similarities in the human experience. This has helped me as an actor because my identity is fluid or flexible in lots of ways because it is multiple. So I am able to be imaginative and peer into worlds which are not necessarily my own without it feeling too alien.

Actually is playing at the Trafalgar Studios from the 6 to 31 August at 7.45pm. You can buy tickets here.