On the way to the Olivier theatre, I happened upon an interview with Tamsin Greig in the Evening Standard where she proclaimed that there is no role in theatre that a woman is incapable of playing. After seeing her outstanding performance, I agree with this more than ever. This new interpretation, which reverses the gender of the traditionally male character Malvolio, has been a huge draw for the production, with most nights almost booked already – even with Storm Doris causing travel chaos on the night I attended, the theatre was teeming. 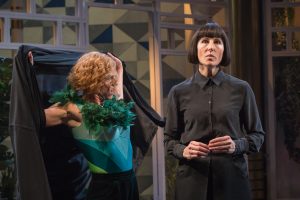 Twelfth Night was named for and originally performed on the twelfth night of Christmas; on this evening, the order of the court was reversed, so the fool would become the king and vice versa. The play channels this chaos through mistaken identities and misplaced affections galore; Countess Olivia falls in love with young Cesario, who is actually a lady disguised as a man who is in love with Count Orsino, who loves Olivia. It is the ideal play for gender bending, considering how the original casting would have seen a male actor playing a female who is pretending to be male, and all preconceived ideas of gender were cast aside. In this production, the puritan character from the comedic side plot, Malvolio, becomes Malvolia, whose affection for Olivia is fuelled by a tricksters’ prank, and leads her to have misplaced delusions of grandeur.

This interpretation of Twelfth Night brought the play forward to contemporary time; Orsino is a car-loving playboy, who boxes in his spare time, when Cesario comes to woo Olivia, her veil has been switched to sunglasses, and Malvolia’s big reveal needs to be seen to be believed. The courtship scenes are even more entertaining when set around Olivia’s hot tub as she tries to talk him into a tiny pair of golden trunks, and when Toby, Feste and Andrew Aguecheek disturb Malvolia with their noise, it is from the pounding rave music that they are blasting out in the courtyard. The Elephant in this production is a neon lit disco house, with a magnificent drag queen performing. Juxtaposed with this modernity, the treatment of Malvolia when she is banished by Olivia seems even more medieval.

The performance was complemented by the clever rotating set; shaped like the inner structure of a pyramid, it turned to reveal different spaces each time, including some surprising water pieces and well thought out levels for sneaky interludes. Props were also used to great effect, including Orsino’s breath spray, tokens of love and sports car, which stylishly drove off the extraordinarily talented saxophonist, who played herself out. The innovative design and quirky features worked well with the absurdity of the play.

The humour in this production was well timed and perfectly delivered, and built up to the finale with sustained energy. Especially self-aware lines in particular were landed with modern verve; I had to check that the comment “if this were played upon a stage now, I could condemn it as an improbable fiction” was really in Shakespeare’s script because the deadpan delivery of Imogen Doel was spot on. Toby’s drunken charm and Maria’s delicious scheming were very compelling, and Aguecheek was delightfully dense; these combined personalities were well matched to Greig’s Malvolia, though it’s true that she dominated the stage in her scenes. Her Malvolia was delicately crafted genius; her command of physicality was so complete that she could bring the house down with one facial twitch. The heavy silence between her lines was testament to how enraptured the audience were. 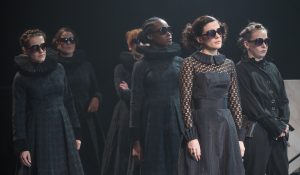 As the scenes with Malvolia and the tricksters were so entertaining, I did find that some of the more narrative scenes in the first half dragged on a little. That’s not to say that Tamara Lawrence as Cesario wasn’t enchanting – the bewildered quality she brought to the role was very effective. Many scenes could at least have been shortened in the first half, which would have helped with the 3 hour running time. However, in the second half, not a line was wasted, and the finale was worthy of the build up. The tone of the end was balanced better than the rest, with plenty of well felt lines (Orsino’s “Thank God!” when Viola is revealed was a particular hit) matched with the unsettling promises of Malvolia.

Twelfth Night will be continuing its run at the Olivier Theatre till 13th May. You can book your tickets from 020 7452 3000 or https://www.nationaltheatre.org.uk/shows/twelfth-night/whats-on