Writer and director Janet Moran tells us all about the real story behind A Holy Show and why she loves the Edinburgh Festival Fringe. 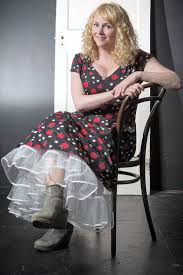 Tell us a bit about A Holy Show, what’s it about and what can audiences expect?

It’s about the real life hijacking of an Aer Lingus plane by an Australian ex Trappist monk. In May 1981, he hijacked a plane from Dublin to London and asked that it be re routed to Iran. Of course that wasn’t possible. Being a short flight, they didn’t have enough fuel to get to Iran so he settled for flying to France where there followed an eight hour standoff before the passengers were finally released. Audiences can expect a very fast and very funny hour watching two actors at the top of their game, jumping between multiple characters. They play the pilot and hijacker and all the passengers to hilarious effect.

A Holy Show is based on a true story, when did you first hear the story and when did you realise it would make good material for a show?

I first saw footage of the hijack on an RTE show, “Reeling in the Years” which scrolls through footage of different events each year from the RTE archives. 1981 was a particularly eventful year. The Hunger Strikes happened, there was an assassination attempt on the Pope and the only case of a domestic Irish airplane being hijacked. I’d never heard of this event, I couldn’t believe it was so little known. I was particularly struck by the good humour of the passengers after they’d been released, with footage showing them drinking wine with their French rescuers. I thought it was an extraordinary event that exemplified a kind of innocence. It also made me think about what a different and much more insular country Ireland was just 40 odd years ago. I actually thought at first that it would make a great film, but I couldn’t get it out of my head and eventually thought of writing a play that used the event to examine Ireland’s relationship with faith and how that has changed. 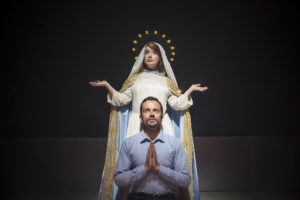 There are many different characters in the show, all played by two people. Where did the inspiration for these pairs come from?

Obviously we had to have the character of the Hijacker and our character still holds the real hijackers name, Lawrence Downey. He is paired with the pilot who we invented for our purposes too. Apart from those I wanted to look at a cross section of characters from across Ireland. The two elderly sisters are actually based on my Gran and her sister who sacrificed a lot to help my granny who had 10 children! Its kind of a testament to their love for each other. Then we have the young married couple who haven’t been intimate yet and are very nervous, I guess that’s something from an earlier age as well, two other young people who are emigrating for various reasons, like so many Irish people over the years. And then we have our yuppie property developer, his secretary who’s pulsating with her own ambition and a gaggle of others. You’ll just have to come and see.

What do you think A Holy Show will leave audiences thinking?

I hope it leaves them thinking about what’s important in life. When it comes down to the crunch and you’re facing your possible death, what really matters? And when we are in extremes like that and our true nature asserts itself, who would you like to be? A hero, a pragmatist or just someone who shows love? I hope it leaves them laughing too, at foibles they can recognize and sympathise with and just how mad life can be sometimes.

What do you love most about the Fringe?

The madness of it. The sheer scale. I find it’s a different experience both as I’ve gotten older and as I have my own play in the Fringe as opposed to merely performing in someone else’s play. The stakes are obviously higher and I certainly feel more vulnerable. It’s a strange one because as Roosevelt said “Comparison is the thief of joy” and there’s no shortage of shows to compare yourself to at Fringe but despite that, it really is extraordinary that a festival of the arts has sustained itself at this scale for so long. And of course, the possibility of seeing something magical and even life changing is ever present here.