Review of: Monkey See Monkey Do

An articulate and intelligent exploration of masculinity and anxiety, masked as alternative comedy and supported by exceptional technical design.

Reviewing a Richard Gadd show is a pretty hostile experience. Not for the experience of being inside the auditorium (here, an extremely sweaty underground room), but merely that of walking past the glares of those who have been queuing since 7pm for a 9.45pm show. Richard Gadd is doing another free show at the Banshee Labyrinth, and like his hit Waiting for Gadot before it, Monkey See Monkey Do is a hot ticket. One audience member I spoke to had already queued, unsuccessfully, twice before. Gadd’s ability to generate buzz is unequalled. Which is strange, because this show is utterly unlike anything he has done before. 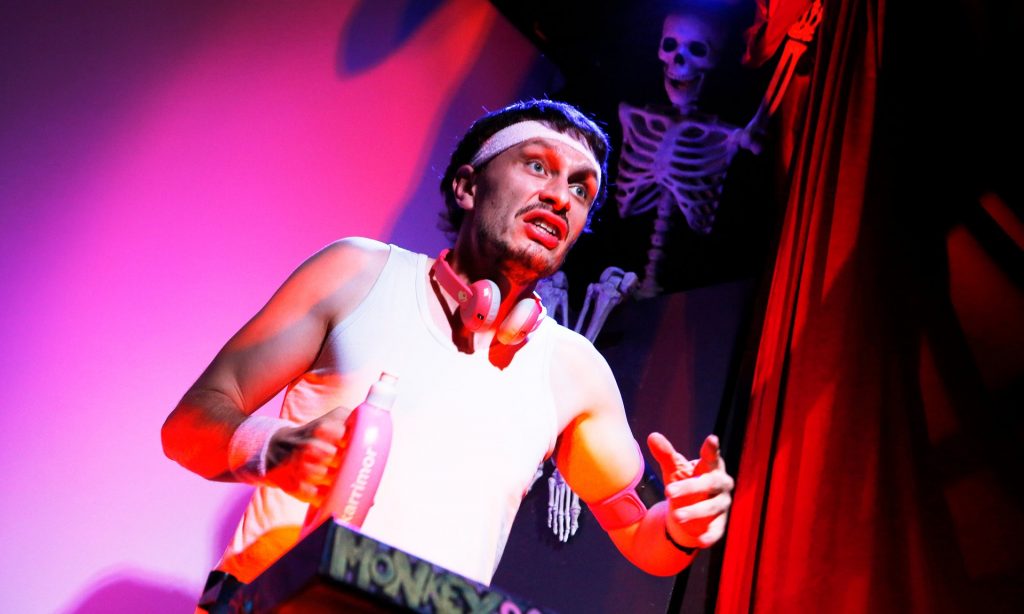 Gadd runs from the monkey on his back

Gadd himself is painfully aware of this situation, admitting that his greatest mistake was listing this show in the comedy section. And perhaps Monkey See Monkey Do is closer to the theatre section than comedy – it certainly is far removed from the stand-up seen for free so commonly in sweltering basements in Edinburgh every night in August. But as a piece of intelligent comic-theatre, it excels.

Gadd’s subject matter is himself – specifically, his journey before and after the success of Waiting For Gadot and the personal demons that continue to beset him. His struggle with these is given narrative structure through his preparation for the “Man’s Man Competition”, with Gadd continually running on a treadmill in one corner of the stage, accompanied by a continual internal monologue punctuated by verbatim conversations with a therapist (as performed by Gadd’s chin.)

Whilst the show is more touching than it is funny, there are excellent comic sequences, accompanied by exceptional technical design. Specifically, a smart remix of “Express Yourself” and a visual representation of the anxiety of a Whatsapp conversation stand out for their brilliant timing. But this slickness is countered by an honest, vulnerable performance from Gadd himself. With all his gimmicks stripped away, he holds the audience rapt.

Gadd’s show is articulate and sensitive on the pressing topic of anxiety and masculinity. For this audience, it was certainly worth the queue.