Review of: All We Ever Wanted Was Everything

An utterly fantastic gig-like play about the pressures and disappointments of life. Stunning.

It might sound vaguely familiar – a girl and a boy, growing up increasingly disillusioned about the hand life has dealt them, comparing themselves to their parents and blaming the world for their faults. However, add a singing asteroid, glowsticks and a glorious Marc Graham in smoky eyeliner and a very different type of beast appears. 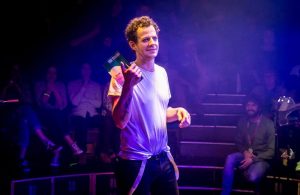 Too often do shows with live music end up relying on the musicians and instruments to keep the attention of the crowd, leaving the staging at a minimum and thereby endangering the drama of the piece. HOWEVER. Paul Smith’s direction is explosive, fusing the atmosphere of a live gig (credit to Marc Graham for always keeping us on our toes) and yet never letting the drama of the piece be overshadowed. Normally ‘telling’ and not ‘showing’ is one of the cardinal sins of theatre, but with Smith’s direction and Graham’s wonderful MCing, the tension is never allowed to fall. There is a hint of the Cabaret MC around Graham’s performance – we are never truly comfortable around his slightly leering persona, but nonetheless have an instinctual trust in his leadership. He admits when he’s tripped over mics, chats to the audience and undermines the actors; if anything goes wrong, we have complete faith in him to pick up the pieces.

The tragedy in this piece is that Leah and Chris (Bryony Davies and James Stanyer), our two protagonists, are both brought up being told that they will be special. They should be able to do anything, be anything, achieve anything – but they can’t. Both Davies and Stanyer bring a beautiful vulnerability to their roles, of being confronted with a past you can’t change and a future you can’t live up to. It is the production’s ability to make something unique out of two lives, two people that are ‘nothing special’ that draws one in and holds one until the end. Stunning, stunning theatre.