Meek by name, meek by nature - a high quality drama that doesn't quite meet higher expectations, but nonetheless delivers a soulful and important examination of the tactics of opression

Penelope Skinner’s latest premiere Meek will do nothing to throw off her accolade of ‘leading feminist writer’. A female-focused story of opression within a fervently religious autocracy, where women must be chaperoned, reproduction is their foremost purpose, and sacrilege is a stonable offence – sound at all familar? Meek unedinably overlaps The Handmaid’s Tale, and even Edinburgh International Festival’s 2017 The Divide. Crucially, however, it was commissioned four years ago, and so technically originated before the huge populist wave of Margaret Atwood spin offs. Designer Max Jones has taken inspiration from a different, but equally popular, media genre and created a moody scandi-noir set of concrete and spartan functionality. With such a winning combination of popular tropes, Meek nonetheless sidesteps simply being another Awful Warning for women, and brings some welcome humanity to its extreme situation. 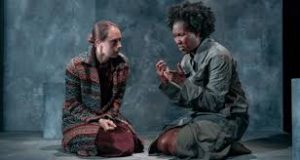 The (often literal) spotlight is on Irene (Shavorne Marks), accused of blasphemy for singing a song about a love affair in a coffee shop. Informed upon by an unknown agent, the story unfolds in a series of vignettes between Irene, her best friend and her lawyer, as she navigates forces outside of her control (and the audience’s view). Whilst her forced martyrdom is a predictable plot device, Skinner’s brilliance lies in making every step of Irene’s path irrefutably relatable. Meek explores how revolutionary leaders are made, not born, and how the public can mythologise ordinary people to suit their own purposes, for instance by reading subversion into Irene’s music.

Zoe Spurr’s lighting design interrogates the three women with shafts of strong, directional light. At times this creates a Biblical aesthetic, turning Irene into a saint, the stage into a religious painting, as if she’s already becoming an icon. Amy Hodge’s direction is similarly functional, often she simply lets Skinner’s words overtake, supported by realistic, simple staging. This amplifies Skinner’s message, but allows the audience to dwell too much on Meek‘s predictability. By giving the audience time to be one step ahead of the narrative unfolding onstage, without the pay off of an unforeseen surprise to shock us out of our omniscience, we will never leave feeling like Meek taught us something we didn’t already know.

It feels cliche to say, but Meek‘s overriding problem is that it’s simply too meek. Skinner sets up a strong situation to explore, but despite good performances from the cast, the characters never get to rise above being simple vessels for ideas. I’ve always loved Skinner’s work precisely because she pries off the labels that drama can slap on to the ‘woman’, the ‘husband’, and gets to grips with the messiness underneath. There were glimmers of this in Meek, but never pushed quite far enough to make it feel less polemical.

Meek is playing at T1, Traverse Theatre, Tuesday – Sunday at various times until 26 August. You can buy tickets here.