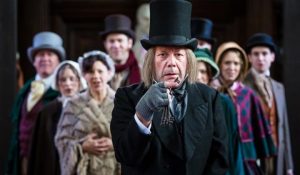 Are you looking forward to Christmas?

I certainly am. We’ve got a busy schedule of shows but Christmas Day and Boxing Day off to recharge the batteries.

What do you think it is about A Christmas Carol that keeps people both staging it and coming to see it?

There’s a timelessness to Dickens’ message – and a hopefulness – that’s just wonderful. It’s such an uplifting story, really. It shows us we can all change for the better, make a difference to society and help our fellow man.

How have you found returning to the role? How’s it different to playing Scrooge for the first time?

With these iconic characters, you find something new in every performance, whether it’s a small bit of stage business or a new way of playing a scene, so it’s nice to be able to come back and have another crack at it.

What do you like about the character of Ebenezer Scrooge?

He’s known as this terrible villain – and he is horrible in many ways, of course – but he’s also a man with hidden pain and regrets. Finding the way to show those moments of vulnerability, little cracks in the mask, is one of the most enjoyable challenges.

What’s it like working with the younger actors? (Harvey Loakes and Charlie McLellan) Do you learn anything from them or teach them anything?

They are such a talented pair of Tiny Tims! One of the best things about working with young actors is their energy and their fearlessness, that’s always exciting.

Can you tell us about how special it is to perform in the spectacular Middle Temple Hall?

Well, Dickens himself was a member of Middle Temple and would have dined in the hall, so you feel this very close connection to him there. And that part of London – the winding roads and alleys around Temple – still look and feel incredibly Dickensian, which helps put the audience in the mood even before they step inside.

What would you say to urge people to come along to see A Christmas Carol?

With music, magic and mulled wine, there’s something for all the family.