Review of: The Twilight Zone at the Almeida 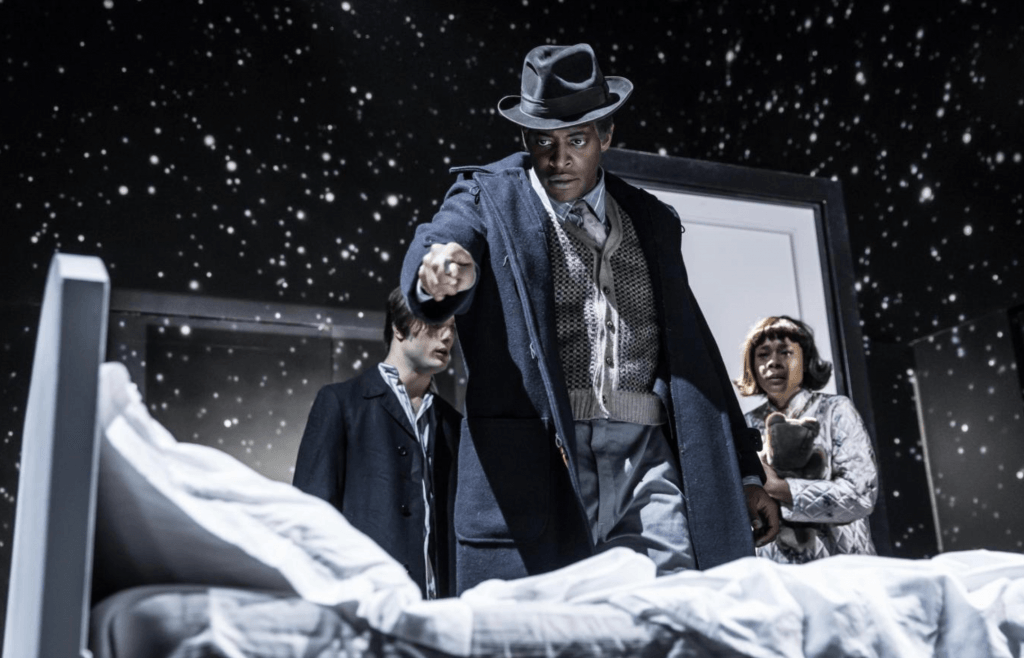 I’ve never seen a single second of The Twilight Zone, the cult ’50s sci-fi, fantasy, thriller, horror culture hybrid TV show upon which Anne Washburn (Mr Burns, another play based on a long-running American serial) has based her new anthologised play, currently running at the Almeida in what is something of an unexpected instalment for the festive season. Perhaps this is a good thing – my opinion not clouded by nostalgic awareness of the show’s in-jokes – or perhaps it deprives me of extra insight into the play itself, not privy to some subtexts or circumstances I should have prepped for.

In some ways, however, it all becomes irrelevant. Washburn has created an altogether different beast in the production, a mixture between informed pastiche and iconoclastic mosaic. We are introduced to different characters, in different surreal circumstances, each embarking on a strange and extreme quest to reach an (often unsettling) conclusion, all colliding for a final thesis presented at the end. We see children being sucked into invisibility, astronauts embarking on space odysseys, or men too afraid to sleep because of the nature of their dreams, all directly taken from the original tales courtesy of Rod Serling, Charles Beaumont and Richard Matheson. It all amounts to a whirling chaos of interwoven plot threads (all overseen by an ensemble cast) that manages to deftly show just how interesting and intricate the originals were.

That said, as much as the play is based on the original stories and the resultant show, it is more than happy dabbling in metatheatrical pursuits, poking fun at the dated nature of the source material while also tentatively pushing through the fourth wall (often into uncharted dimensions beyond). There’s depth, and Washburn doesn’t hesitate in really going to town with it, unafraid to potentially alienate audiences in the process.

While I haven’t seen Twilight Zone, I have definitely watched scores of hours of TV that it has inspired, prompted or directly triggered. Shows like Doctor Who, Black Mirror or even major film series like Blade Runner all owe a debt to serial. In that respect, it makes perfect sense for Washburn to go back and re-examine their progenitor, six decades on. The world has changed since the 1950s, or so we want to think. With this strange duality to its temporality, the piece feels as fittingly undefinable as the show was back in the middle of the last century. Sometimes it works, sometimes it doesn’t – a surreal musical number, as well as the final monologue, all seemed to overstay their welcome.

When the show lands, it lands spectacularly, particularly in a few standalone scenes including one particularly charged moment over an atomic bomb shelter. It is carried by some stellar performances from the likes of Matthew Needham (trading his romantic barbs in Much Ado for haughty elusiveness here) and Franc Ashman, giving the show real heartbreak in some pivotal moments. It must also be added that no one performer stands out – they all click and juggling the multi-roling ably.

In a way, it is director Richard Jones that sometimes seems to indulge the script too much, and while his set pieces click marvellously,  protracted and overly stylised scene changes begin to feel a tad repetitive and disconcerting. It doesn’t help that, for all its versatility, there’s a strange flimsiness to Paul Steinberg’s set, almost unsure of itself. For a play trying to deal with the ambiguities of imagination, memory, perception and society, the lack of rigidity on stage, especially with the flats and swinging doors, felt all the more pronounced. That said, fantastic monochromatic touches like de-saturated Budweiser bottles work like a charm.

Washburn will invariably divide critics straight down the middle with her adaptation, and it ends up lying somewhere between slightly laboured and brilliantly innovative, a tad worn while strikingly new. A place, where the ideas feel accessible, though perhaps too convoluted. A territory, situated between sublime and somewhat subpar. This play, ladies and gentlemen, is in somewhere that might be known as a critical Twilight Zone.

The Twilight Zone runs until 29 January. Buy tickets at the link above.