Sisters Alex and Kate Donnachie are working together on the autobiographical show 3 Years, 1 Week and a Lemon Drizzle, which tells the true story of their experience of Alex developing an eating disorder. We caught up with them in advance of the Fringe to find out how their preparation is going. 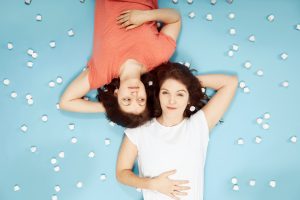 It’s quite slow and steady but we’re feeling tentatively okay about it all. We’re not in full-time rehearsals yet because Kate is still at drama school but she finishes very soon. It means Alex can get as much admin stuff out of the way as possible before we hit our intense rehearsal period. When we (Alex) starts panicking about how soon it is, we just keep telling ourselves that we’re in the fortunate position to have a show to re-learn and develop rather than having to make a one from scratch!

How have you found working on the show as sisters?

Alex: We’re still talking so that’s a good sign! It’s definitely the most honest rehearsal room I’ve ever been in and that’s quite refreshing. We don’t pussyfoot around each other if we don’t like something. There have been a lot of laughs and a few tears that have gone into in the show. Perhaps ask us again after the festival but, so far, I’ve loved it.

Kate: Very much the same as Alex! It’s really nice to be so comfortable with each other when making the show, it’s so much easier to talk about bits we don’t like and discuss ideas because we know each other so well. I’m not nervous about going to Edinburgh because I get to go with Alex and if anything doesn’t go to plan, it’s ok because we will sort it out together. I’m not sure how I feel about living with her again for a month, but I’m excited for the show!

When dealing with mental illness and eating disorder, how are you negotiating making the story approachable and still accurately reflecting your experience?

Kate: It’s difficult; we can only hope we’ve got the balance right. We use a lot of humour which we did at the time Alex was ill. It wasn’t necessarily the right way to deal with it and wasn’t always healthy but it was the only way some members of our family knew how to cope with this horrible situation that was affecting us all so it made sense to try and replicate that in the show. Our relationship possibly helps the story remain approachable too, purely because so many people can understand the hierarchy that comes with being an older or younger sibling, cousin or even a close friend and so we hope that dynamic on stage is interesting and relatable enough on its own.

Alex: Apart from seeing loads of fantastic shows, we seem to have more friends than ever going up this year so it will be nice to see them outside of performing and flyering. I’m also looking forward to seeing if I can beat my record for the number of shows seen in a month. And, of course, a 3am Palmyra falafel wrap!

Kate: It’s the first time I’ve been up to the festival for the whole month and so getting to see the Fringe from start to finish is really exciting! Also, I love walking up Arthur’s Seat so I’d love to have a celebratory cup of tea and a lemon drizzle at the top this year.

Look after yourselves kids! Make the most of the walks between venues and make time to just sit and have a coffee every once in a while. And don’t beat yourself up for missing that show that everyone says YOU HAVE TO SEE. Unless it’s ours of course. But seriously, the Fringe is wonderful but it can be intense. Take care, especially if you’re up there all month.

3 Years, 1 Week and a Lemon Drizzle is on at Underbelly Bristo Square at 14.25, from 1st-25th August. The performance on 18th August will be captioned. Tickets start at £7.30, and are available here.