ELF, the hit West End and Broadway musical based on the Hollywood blockbuster movie starring Will Ferrell, is to be supersized into a Christmas spectacular which will tour the UK in December 2018. This extravaganza will play three major arenas this Christmas: Cardiff Motorpoint Arena, Birmingham Genting Arena and Nottingham Motorpoint Arena. Tickets go on-sale on Friday 9 March at 9am. 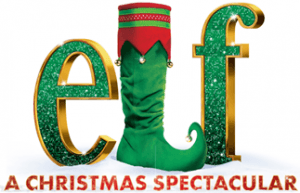 As well as being a hugely successful singer/songwriter, director and best-selling author, David Essex has starred as the lead in many musicals from Evita to War of the Worlds and is particularly excited to be taking on the role of Buddy’s grumpy and unwitting dad. David said: “I’m really looking forward to taking Elf on tour.  The big special effects that we have lined-up are incredible, including a giant sleigh which will fly across the arena, an indoor snow blizzard and lots of skating which all adds to this perfect Christmas story.”

Actress, singer and former EastEnders star Martine McCutcheon, added: “I’m absolutely delighted to be appearing in this wonderful show.  Elf is without doubt one of the all-time great Christmas movies, so I hope audiences in Cardiff, Birmingham and Nottingham will love this production just as much as the film!”

Tam Ryan, who will be stepping into the big floppy shoes of Will Ferrell, said: “It’s such an honour to play this hugely popular movie character. It feels like Christmas has come early, see you in December!”

The original stage version played to record breaking audiences in 2015/2016 at London’s Dominion Theatre and firmly established this heart-warming tale of Buddy the Elf leaving Santa at the North Pole to seek his real father in New York as a Christmas classic.  This new Christmas Spectacular production will feature a book written by Bob Martin and Thomas Meehan (Annie, The Producers and Hairspray) and an original score of great new songs.  The original staging will be enhanced with giant screens, showing both computer graphic backdrops and live action close-ups. The 5,000 seat arena layout will have a 70-foot wide stage and a 60-foot long thrust stage, with some scenes taking place around and above the audience.

Elf will be produced by WBP Ltd, the team behind last year’s Christmas spectacular Peter Pan, which played at Arena Birmingham and The SSE Arena, Wembley.

For tickets, visit the venue box office or theticketfactory.com