Review of: Me, Myself and Rita

While an interesting idea and a committed central performance, the drama of Me Myself and Rita fluctuated too much to be a wholly successful show.

A one-woman show both written and performed by Almog Pail, Me Myself and Rita is a somewhat bemusing journey through the life of 1940’s icon Rita Hayworth. Peppered with songs and dance routines reflecting on Hayworth’s life, the piece (while given an enthusiastic performance) never feels like it truly reveals Rita’s ultimate motivations and soul. 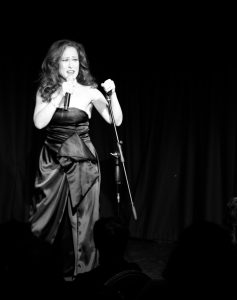 It seems tricky not to compare this show to the recent Lady Day at Emerson’s Bar and Grill, a very similar concept based around Billy Holiday’s career, starring Audra MacDonald. However, it becomes clear that for all of Pail’s talent, the character and personality of Hayworth is never truly allowed to come across in the first-person narrative form the team have settled on. Explaining her life on a stage just slightly too small for Hayworth’s larger-than-life self, Pail and her accompanist always feel like they are on the outside looking in, rather than truly embodying the troubled star. Part of this is due to the constraints of the space, part due to what seems like a change in the makeup of the show compared to previous iterations. Within the programme and on the website a cast of four is mentioned; here there are only two. Videos and films are touched upon in publicity material; here we only see a black box. One can see how these might have livened up the action and given the show more drama; Pail and the piano carry the show well for the first half, but the same-y nature of the action means the piece dragged after hitting the deadly 50 minute mark.

Whether the show has been stripped down for this particular venue or whether a new version of it has come out of previous performances, the difficulties the space presented had a very tangible effect on the pace of the show. In fact, one of the piece’s most successful moments came when Pail abandoned the stage altogether, wandering amongst those watching and using the various men in the auditorium to illustrate her five husbands. Easily the most convincing moment of the evening, the gestures and vocal tone suddenly fell into place and we could see what Pail was striving for all along – a subtlety that was somewhat diluted on the stage. While an interesting idea and a committed central performance, the drama of Me Myself and Rita fluctuated too much to be a wholly successful show.