Review of: Saint George and the Dragon at the National Theatre

An interesting, albeit quite shortsighted new play from Rory Mullarkey

Applying a rough familial structure to Rory Mullarkey’s new play, currently playing on the cavernous Olivier stage at the National, the show feels like the lovechild between Rufus Norris’s Everyman and Carol Ann Duffy’s My Country. Both, in their own ways, interrogated our national identity, some choosing more literal interpretations than others no doubt, but each observing the fact that this theatre, beyond all others in the country, is ripe for deconstructing our heritage and beliefs. 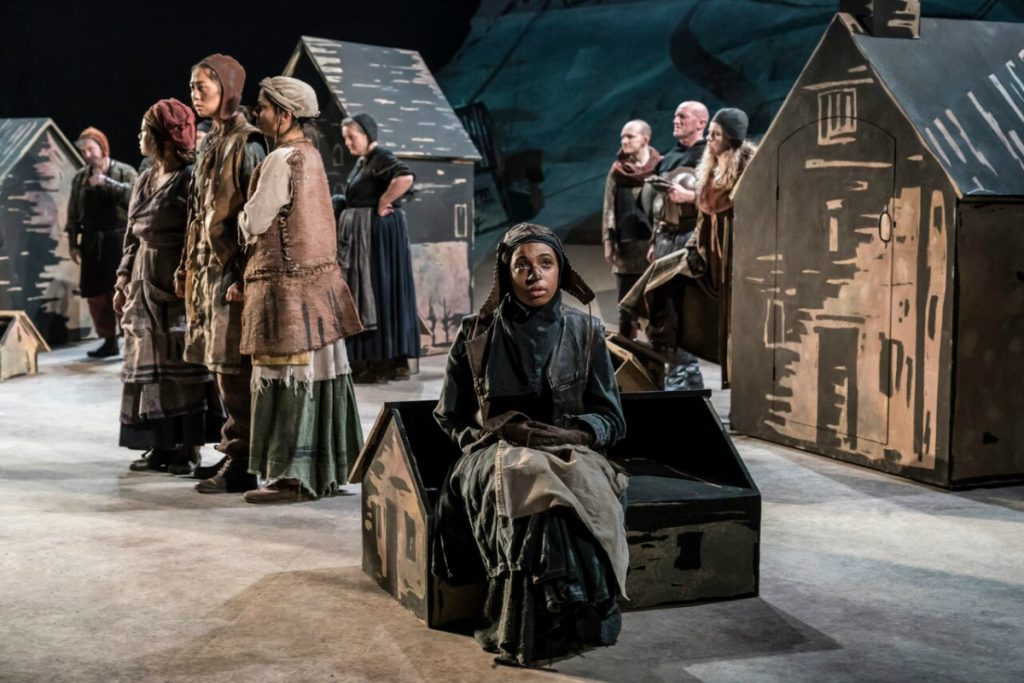 So Mullarkey has done here with his modern-day parable, in a snowglobe Britain meticulously designed by Rae Smith. The play comes in three acts, each alighting on different periods in British history and seen through the eyes of chivalrous hero George, the Dragonslayer (a piousJohn Heffernan). We start with the medieval, move to the Industrial Revolution and from there hit the modern day, replete with a sea of high-vis jackets. Each is inhabited by the same characters, with time passing in the blink of an eye, allowing us to invest and discover the nuances of the same group. In each act, George fights the dragon (a dastardly Julian Bleach), trying to overcome the tyranny oppressing the people.

It’s easy to see where Mullarkey is going with the play, and the novelty does wear off. The dragon, an overlord essentially constructed by the development and beliefs of the people (think Mr World in Neil Gaiman’s American Gods) has to be vanquished, but each time becomes less literal, less physical, and more intrinsic, insubstantial (just like our systems of coinage, no less). While the dragon may begin as some externalised force, we come to realise that, in our modern society where we all collude on this same capitalist and individualistic endeavour, we have already lost. We are all complicit in the dragon’s schemes, just as we endorse the current system of oppression. There is no knight to save us now. It’s a bleak, albeit adroit conclusion.

And more to the point the show is funny – Heffernan’s fish-out-of-water antics as his chivalrous behaviour becomes more and more outdated garnering a lot of laughs, especially in a pub scene in the second act. Many have already commented on how reminiscent the whole experience is of the 2012 Olympic Opening Ceremony, but this is more interrogative than celebratory. For everything we’ve built, we’ve also undermined (though fleeting references to colonialism are quickly brushed aside).

The ensemble fares well and brightly throughout the show, creating a series of individuals you can define across the ages. Inasmuch as Mullarkey has tried to build something enticing here though, it seems as though it just needed another twist, another answer, to the one we’ve already heard countless times before. As it stands the show simply baulks, rolls over and shrugs its shoulders at us. If you’re going to the trouble of filling the Olivier, at least try and break new ground.

Saint George and the Dragon runs until 3 December.