Shakespeare in a gorgeous venue, slightly let down by beating the audience around the head with awkwardly-done modern parallels

A man becomes the unlikely leader of his country. Nobody could have predicted such an unsuitable candidate would ultimately take the top job. Once in power he thinks nothing of betraying his most trusted advisors, the ones that got him to power. His handshake is an insecure exercise in power play. He treats women with contempt. Ready to go on the war path without regard for the ramifications, his belligerence would be comical were it not for his powerful army. He displays a paranoia more in keeping with a tin-pot dictator than the most powerful man in the country. I am of course talking about Richard III. 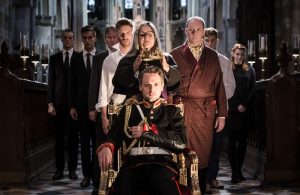 The aisle of the 12th Century marvel Temple Church forms a natural traverse stage. It is an exquisite place to stage a play (Why hasn’t anybody thought to do this before? Oh wait, they have -this is a return to Temple by Antic Disposition after staging Henry V here last year). Each line echoes around the arena and the chiaroscuro of the players on the church vaults and columns lends the production a claustrophobia akin to that which closes in on Richard throughout the play. No doubt the star of this production is the empty space.

Toby Manley’s Richard, variously clad in bowtie and tails, House of Windsor regalia, and finally black military fatigues, manages to elicit Gloucester’s solicitude early on. But this works against his ability to embody the man’s martial prowess. The ’piping time of peace’ is unbearable for someone who knows the only place he is judged on his merits is the battlefield. Grizzled battle axe Queen Margaret – here a World War Two veteran – comes in draped in the House of Lancaster flag to act as Cassandra to the troubled court. She seems the only one able to stand up to Richard and see through his ‘sugared words’. The cupidity of Buckingham allows him to callously dismiss underlings
with his Blackberry, making his betrayal by Richard that much more shattering when done in person.

Standing at the foot of the stage the murdered cast members, one by one, look on as ghosts – passing judgement, enervating us as well as Richard and ably contributing to his mania. There are some nice nods to our present interesting times; the aforementioned Trumpian greeting is one, as well as the victorious Richmond ends the play with a chilling foreshadowing of the terrible corruptions of power. But many tedious moments too, including assassin Tyrell as cockney geezer and generals doing yoga. Alas the modern dress production also insists on comparing courtiers to the Cabinet with a cameo from Boris Johnson, complete with blond wig and shambolic affectation by Charles Neville. Potshots, especially when done as feebly as this, point to an affronted sensibility which sneers from the sidelines to compensate for a lack of power. I guarantee you this Bojo, like Richard, doesn’t waste time worrying about all the people making fun of his appearance or supercilious manner. No. He spends his days corrupting our body-politic.