Review of: Siri at Summerhall

Having worked in mobile tech, even AI, for the last two years, I certainly feel a level of investment in how such ideas are depicted on stage. It’s hard to get right – a lot of shows, attempting to integrate tech into their performances, can fall largely flat – see Twitstorm at the Park Theatre as a case in point. The form of theatre never feels wholly compatible with modern consumer technology – the former a largely experiential concept that relies on human interaction, the latter often transforming, streamlining said interaction. Communication becomes a process, rather than an art-form.

So I was excited to see Siri. Undermining this technological functionality and constructing something artistically enthralling was a tantalising prospect. The show is billed as a two woman show with one woman performing, the second artist, of course, being the native software housed within every modern iPhone device. We carry Siri with us everywhere. She is probably in most populated houses in the western world. 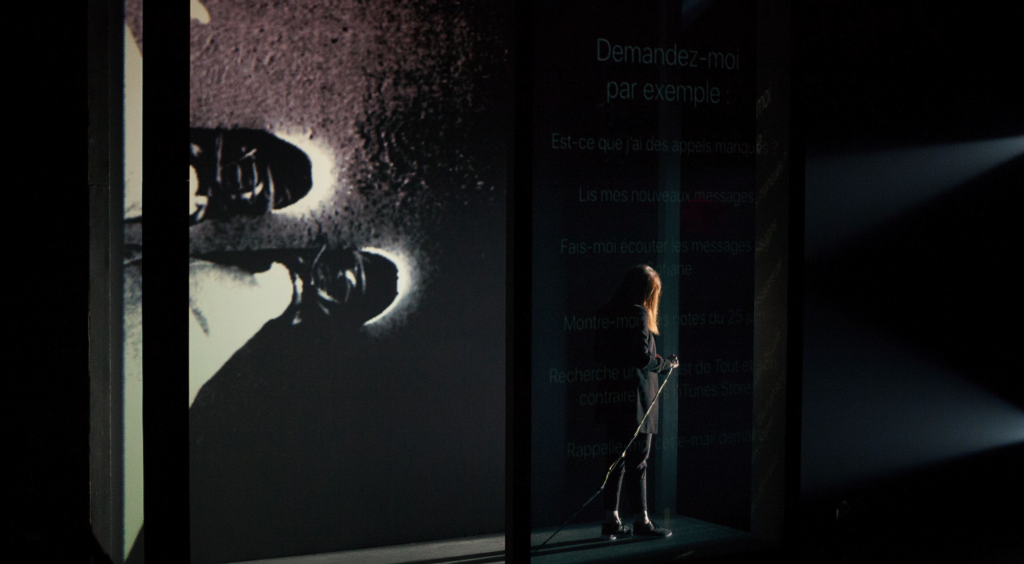 So to that extent the show works nicely, with Canadian performer Laurence Dauphinais primarily introducing us to Siri and the six year history of her life thusfar. As a child of IVF Dauphinais alludes towards a certain affinity with the AI tech – both formed in labs, the material of their birth father given over to their adopted father – just as Dag Kittlaus relinquished control of Siri when Apple bought the software. The most interesting element of the show was regarding how Kittlaus and Jobs wanted different things – Kittlaus wanted it to be a wild dog, using information for inference and development, technology augmenting itself through time and for its own sake. Jobs, as we well know, had a much more consumerist perspective in mind.

The novelty wears off, and after this Dauphinais’s probes and questions to Siri become more repetitive. It doesn’t take long to realise that Siri is coy, readily obfuscating or tricked into profundity only by a leading question. The artificiality of the intelligence is very quickly opaque. She squirms with questions and never relinquishes control. The wonder of the AI starts to feel more manufactured – one tech issue also saw the Quicktime screen recorder logo pop up and distract from the execution. We are conscious of how scripted and mechanical the show is – both through dialogue and code.

This is Dauphinais’s show and she is right to bring out the personal angle, but it feels almost as if the content is too thinly spread across the hour. Siri is fruitful, exciting, but never feels like it accomplishes as much as it could have done.