Review of: Richard Carpenter Is Close To You

Light entertainment that is not so light!

A brightly lit corner and a raised platform with an electronic keyboard is all it takes for the talented Mr Floyd to capture Richard Carpenter, or a version of him. Half of the famous duo of the platinum busting band, The Carpenters, Floyd gives us a glimpse of life beyond the peak of success post the death of his sister Karen.

He present himself as figure caught in aspic – never seemingly having left the 70s, with his bobbed hair, bright rayon shirt and white platform shoes. He plays the piano along with several other instruments demonstrating his talent and neurosis – and that’s where the crux of this piece lies.

Richard was clearly a talent and creative driver of the band, indeed it seems as if he was even a protégé, so how come everyone only knows Karen? Her melodic sweet voice stamped the identity on the band and forever eclipsed Richard. 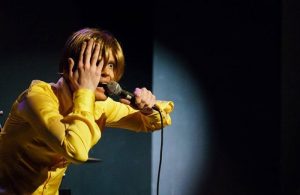 Mathew Floyd is Richard Carpenter and he is not feeling on top of the world!

Floyd is a master of parody mimicking the musical style of the band. He cleverly revisits his versions of the hits, wryly admitting that any similarity to his versions is coincidental due to copyright reasons. It is a fun trip down memory lane and serves to remind us just how many hits are known and rather cleverly he hardly sings an original lyric. The entire piece is parody of the brother and sister band and explores what it is to be overshadowed and overlooked due to rival sibling talent. Post Karen’s death it seems as if Richard never got in the limelight again. Banished to radio chat shows and shopping channel drivel he becomes ever more frustrated at the lack of recognition and the assumption that the band was Karen. Clearly, he does not feel on top of the world.

As the piece moves towards a conclusion help is at hand in the form of Venus Williams, whom he imagines as being happy with her 7 grand slams to Serna’s 23! He wittily crawls through list of siblings where one seems to outshine the other, the Millibands, the Murrays, the Jacksons or the Osmonds and even the Kennedys. He consoles himself with the thought that a race run is better than no race at all. Anyway, he knows what he contributed, the sound, the mix, the creative force, the backup vocalist – ah yes, back up.

This is clever and smart entertainment and Floyd is clearly a real talent. The hurdle he needs to get over is the expectations of the audience who, I suspect go to hear the hits of the Carpenters, only to be presented with an ironic look at fame and sibling rivalry. It’s a tricky circle to square but I would urge you to go and appreciate Floyd’s talent and skill for what it is with the added bonus of it might just make you think along the way – and of course laugh.

Light entertainment that’s not so light!