Difficulty in communication overcomes moments of brilliance in this Soho production

Bombs fall, lights crash, noise from the show next door creeps in. At one point in Soho Theatre’s Girls, I was suddenly terrified that the sounds of explosions we could hear weren’t coming from the sound desk, but were rather the impending nuclear war finally beginning. It then occurred to me that this level of fear was in fact what the characters in Girls – young women in Nigeria, worlds ripped apart by Daesh – were to have felt. It was strange, having this dual thought process, and somewhat shaming that my own fear was necessary to create this empathy for the story on stage. In the mostly white audience of this mostly black play, it became less than academic. 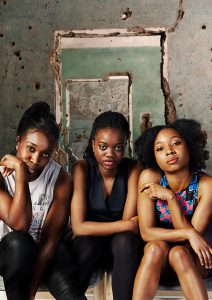 It cannot be denied, then, that Girls is a powerful piece. Theresa Ikoko’s play pulls together the familiar (the girls talk about the Kardashians and Big Brother, for example) and the shockingly distant (they also debate whether or not it’s appropriate to marry one of their captors as a way of staying safe). Shocking us and creating empathy is, when it does this, what the show does best. The most powerful moments are those that feel most real, and these are frequent, created expertly through strong direction and convincing characters. When one of the characters miscarries on stage, part way through her baby shower, it is genuinely shocking, another moment that links our world to theirs.

What brings this down, though, is the segments that distance us again from the action. A lot of the blocking has the actresses sitting or close to the ground which, in the Pleasance venue, makes them invisible to the majority of the audience. So much of the play is lost to this that, when combined with a few moments of distracting lights and overwhelming sound, it is hard to maintain a connection to the characters as an audience member. This is made even more frustrating when I consider the moments in which we do feel akin to the characters.