Review of: Junkyard at the Rose Theatre, Kingston

Junkyard is a fantastic production, one certainly geared to return at some stage.

Jack Thorne’s capacity to write earnest and truthful young characters continues to astound. If his calibre was not previously proven by The Cursed Child, it is Junkyard that goes a step further, embellishing a group of individuals with traits and ideas that feel natural, relatable and, fundamentally, entertaining.

Speaking to the cast after their opening at the Rose Theatre Kingston (the final stop after a long tour across Bristol Old Vic and Theatr Clywd), what was most astounding was how personal the piece was – detailing the construction and investment of a Junkyard playground, a real structure that still stands in Bristol after 40 years of use. The original was overseen by none other than Thorne’s own father (the Mick of then here reconfigured into the teaching assistant Rick), bringing an intrinsically biographical note to proceedings, and in a way making Junkyard the second show where the writer has tried to explore the relationship between father and son (perhaps one of the highlights of Harry Potter) – except this time it’s done by putting himself into the equation more fruitfully.

We follow the Junkyard’s construction through the eyes of our chief protagonist Fizz, a standoffish, disillusioned young girl, played with a magnificent presence and realism by Erin Doherty. Doherty’s ability to perform both as a young person, then again as a young person aware of the fact they’re performing, was a subtly charged touch – one mirrored by an incredibly strong cast (each also having to deal with a set that is perhaps nothing short of a death trap at the best of times). Particular applause must go to Enyi Okoronkwo as the introverted Talc – wracked with an endearing insecurity yet also never feeling one-note – in a role that can easily become so when tackled by less skilled performers. 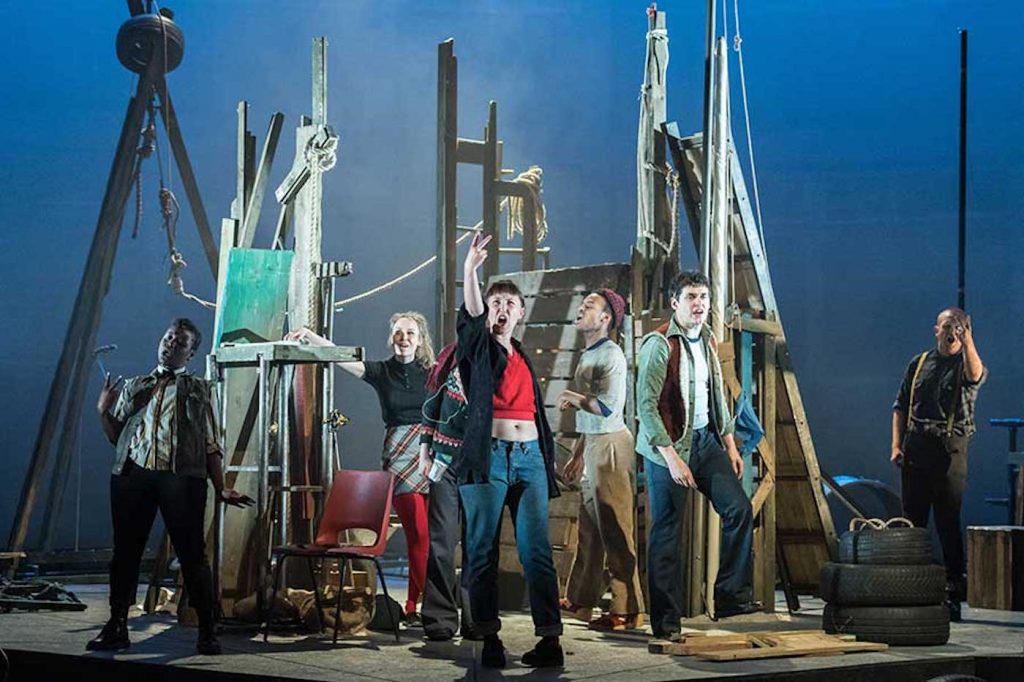 As the show progresses the Junkyard sees drama, anguish, jubilation, comes to house a consistent crucible for tension. This was a playground, both on-stage and by existing on a stage. Stephen Warbeck’s compositions, reminiscent of London Road in the use of refrains and overlapping phrases, fit this childish vibe perfectly, with the cast and musicians also able to simply perform as children, in a show that could have never worked if told from any other perspective. If you don’t coming out humming the tune to ‘This is a Spider’ then you’ve not been paying enough attention. The comparison with Thorne’s Let The Right One In is an easy one here, but the reckless sense of abandon distinguishes the show from the gloomier oppression present there.

The show had a few stumbles – often the humour came so thick and fast that punchlines were lost in the anarchic haze, but this is something that seems almost inevitable in a show that is meant to reflect the creative yet uncontrolled energy of youth. A fantastic production, one certainly geared to return at some stage.