A thoughtful text and strong performances were let down by gimmicky, confusing staging.

Marlowe’s Tamburlaine was loosely based on the life of Timur, the fourteenth Turco-Mongol tyrant who conquered huge swathes of Africa and Asia, killing an estimated 5% of the world’s population in the process. It’s worth remembering that Marlowe wrote this play to sate (or stoke) the appetite of xenophobic Elizabethans for tales of the barbaric “Orient.” Tamburlaine, with its unremittingly cruel protagonist, does not disappoint, making for uncomfortable viewing within the context of contemporary prejudices, and the region’s modern crisis.

This makes Yellow Earth’s adaptation all the more poignant: an Asian-led cast reclaims this Asian king from the white literary canon, thus challenging Eurocentric views about the Middle East.

Ng Choon Ping’s textual adaptation is a strong piece of work; he has retained Marlowe’s poetry and his sarcasm, and both felt accessible to a modern audience. Condensing a ten-act play into two hours is no mean feat, and this was achieved with confidence, without any sense of truncation. Perhaps the ending came a little too suddenly, leaving Tamburlaine’s demise as too much of a surprise, but then Marlowe himself robs us of the Shakespearean showdown we desire. Tamburlaine realises, like Macbeth, that his crown is slippery and hollow. But he does not live long enough to meet his Macduff in the figure of Callipine.

The stripped back text was complemented by a playing space empty aside from a screen, onto which were projected helpful character reminders and clever graphics, which provided a sense of the epic scale needed for this gigantic story. However, at times it did feel that the performers got a little lost in the space; stretches of text were accompanied by the actors walking and talking, exchanging places, standing and sitting, which felt like decorations rather than delineations of the text. There were moments where the space was used to great effect, as in the sections with Tamburlaine and his sons, where the blocking allowed for a clear contrast to be drawn between the slavish emulation of Anippe and Amyras, and the more doubtful Calyphas, who has his mother’s softness.

Given the gender-blind casting, I felt that Ping could have been bolder in exploring these familial relationships. Having women play murderous, powerful men lends something poignant to these roles, which Ping thoroughly exploited, but this play also contains passionate love, which did not necessarily come across. Lourdes Faberes shines as the warrior king, passionate in his conquest for glory, but Marlowe also presents fiery, improbable, dynasty-defying love between Tamburlaine and Zenocrate, which could be explored more bravely between two female actors. 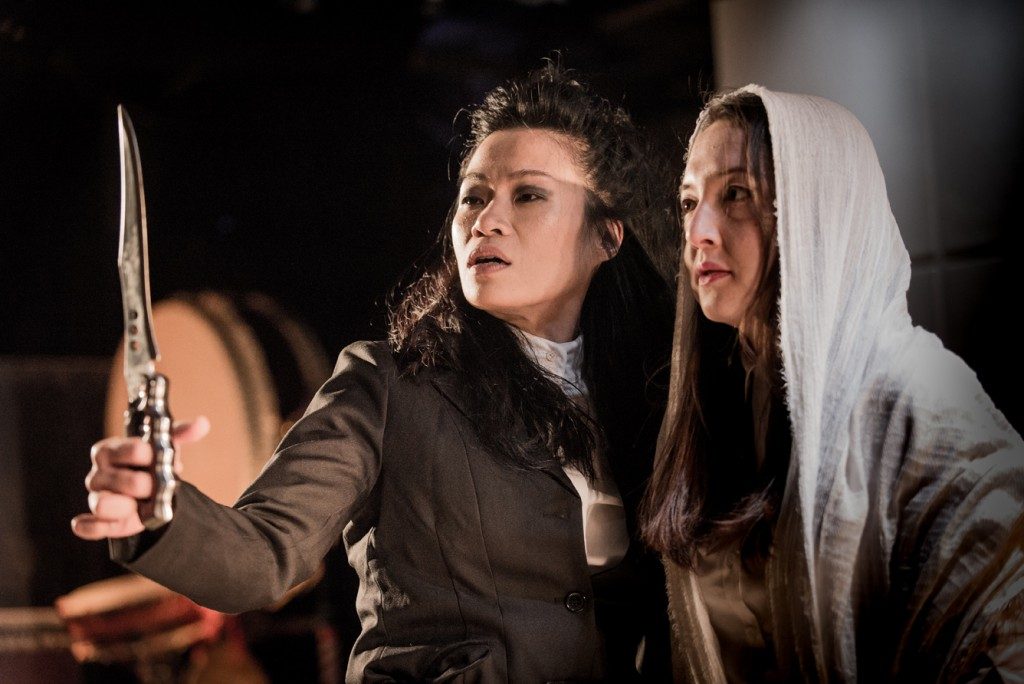 The ensemble made effective use of multirole for the other parts, changing characters almost winkingly. Most notable were Melody Brown’s Bajazeth, the caged Persian king, and Mycetes, his brother and predecessor, played by Leo Wan with camp, hand-wringing flair.

One of the highlights of this production was the live music, composed and performed by Joji Hirota, which underscored the story to great effect. At one point the live music was interrupted by an incongruous burst of recorded jazz, to mark Zenocrates’ death, which jarred in comparison to Hirota’s inventive Eastern soundscape.

Also incongruous was the English riding gear that the cast all wore, which seemed to inhibit their movement, and confused me even more than the walking and talking – I still haven’t worked out the purpose of this. Overall, it felt like the play was trying to make a few too many statements, and the story lost its way. It’s a shame that such a thoughtful text, and strong performances, were let down by the staging. This firebrand left me a little cold, and quite confused.