In Bunny, playwright Jack Thorne has constructed a lengthy monologue exploring the inner ranting of a teenage girl from Luton, notably her numerous sexual exploits that punctuate her school days and Luton nights. His writing is edgy, provocative and visceral at times, seeking to chronicle the emotional needs a young woman unsure of her identity. Katie is so absorbed and distracted by events (sexual or otherwise) that, like a rabbit blinded by headlights, she fails to recognize the kindness or support that may be around her and goes for the option of ‘if I’m noticed and desired then I must be somebody’. 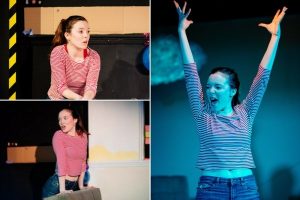 Thorne’s writing is smart and knowing when playing with the connotations of the ‘Bunny’ title; the imagery weaves its way through the dramatic monologue as it resonates innocence and seduction; flighty yet inert – both pet and vermin. This Fabricate Theatre production is a testament to the company’s commitment of putting on modern writing that attempts to reach young people who might not attend the theatre, and to this end it is a bold, challenging and serious piece of work.

Catherine Lamb, founder of the company and leading actress, plays the character with brio and a confidence so readily found in the brash, insecure years of teenagedom. Her delivery is nuanced and is both appealing and unsettling at times. One chair in a black box setting is used with a physicality which enlivens the piece (creatively directed by Lucy Curtis), as car or sofa are created in a flash of energy. The switch from past to present is equally snappy and theatrical, with the style of physical theatre probably owing much to the work of Angela Gasparetto, the piece’s movement director. Lamb’s powerfully sustained performance inhabits the entirety of the Tristran Bates stage, with the moments where she leans or slides or jumps or bashes walls adding a further sense of the untamed, a sense of entrapment. This bunny is gong nowhere, and as she bobs and dips around Lamb presents a foul mouthed, gloriously contradictory character – not valuing the parents who care for her, the school who supports her, the friends who attend her party or the music to which she could escape to.

Lamb delivers a performance with a style and skill which will, no doubt, have teenagers talking and challenging this dissolute portrayal of an able sixth former who, though intelligent, slowly excludes herself from the possibility of good to engage with more disturbing forces. I would like to think that true to character she does not go the whole way – but who knows? Eager new audiences will no doubt continue this discussion – a grand result, then, for Caroline Lamb and Fabricate Theatre.