Collide’s production of Sarah Kane’s 4.48 Psychosis, staged ambitiously in the Crypt Gallery in St Pancras Church, for all its flaws, is visually arresting and imaginative. Director Emily Louizou grapples with a very difficult play and once again illustrates her talent for directing chillingly effective ensembles and creating strong, unsettling images on the stage.

There are aesthetic links here between 4.48 Psychosis and her interpretation of The Bacchae (reviewed here) – strands of fabric create a beating, bloody forest and distressed pieces of latex, hung in an abattoir, look like giant, revolting slices of meat, green light shining through creating an air of decay, disease and decline. 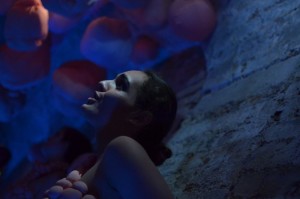 Adapting any piece for a promenade performance is difficult though, through the visual flare shown by Louizou and designers Lily Hassioti, Ileana Arnaoutou and Avra
Alevropoulou, the Crypt Gallery is transformed into a claustrophobic, intense, oppressive warren representing a consciousness under great pressure. Cellophane walls shift, bodies pulse through light into darkness and discordant trembling strings and percussion – performed live by Clemence Roberts and composed by David Denyer – haunt the space. Its very atmospheric and very effective and I like the choice of space also – the Crypt, a place of decay, death and burial, foreshadows suicide and ruin. 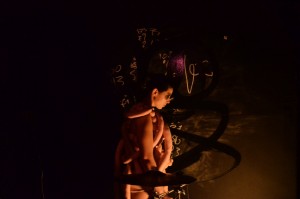 The play itself is a difficult beast, multiple actors all playing elements of one psyche and whilst the design is effective in creating the discordant atmosphere, some of the acting choices seem to be at odds with the stylistic intent of the production. The all-female cast are very good when working as an ensemble, speaking with multiple interpretations of one voice. Sadly, they’re less effective in individual moments, when they’re each given chunks of the text to deliver. The actors tend towards naturalism, which, for me, doesn’t sit right with Kane’s writing.

I don’t mean to imply here that the show is a triumph of production over substance. Rather the design is an integral part of the experience and the main flaw in Collide’s interpretation is the discrepancy between the stylistic choices and the acting choices. This is a bold debut for the company with much to commend and I look forward to seeing how their confidence grows as their voice becomes clearer.

Collide’s run of 4.48 Psychosis continues at the Crypt Gallery until 10th October. More information can be found on the company’s website: https://collidetheatre.wordpress.com/.