A re-imagining of Tartuffe to modern Birmingham works perfectly in highlighting that the issues that Moliere was satirising in the seventeenth century have great resonance when transposed to the twenty-first. Farce at its best.

Theatre is at its best when it takes risks, and when those risks pay off. Anil Gupta and Richard Pinto’s new version of Tartuffe, in a modern West Midlands setting, takes some big risks and, to a large extent, they pay off handsomely.

Imran Pervaiz has made a fortune organising parties and events, allowing his Anglo-Pakistani family to live the good life indulgently in a prosperous Birmingham suburb. However, he has become racked with guilt that this lifestyle compromises his Muslim upbringing and beliefs. Having met a supposed religious guru, Tahir Taufiq Arsuf (”Tartuffe”), he has resolved to change both his and his family’s blasphemous ways. Not only is Tartuffe invited into the family home but Imran also seeks to marry him to his daughter and transfer his assets, freeing himself from his life of excess. 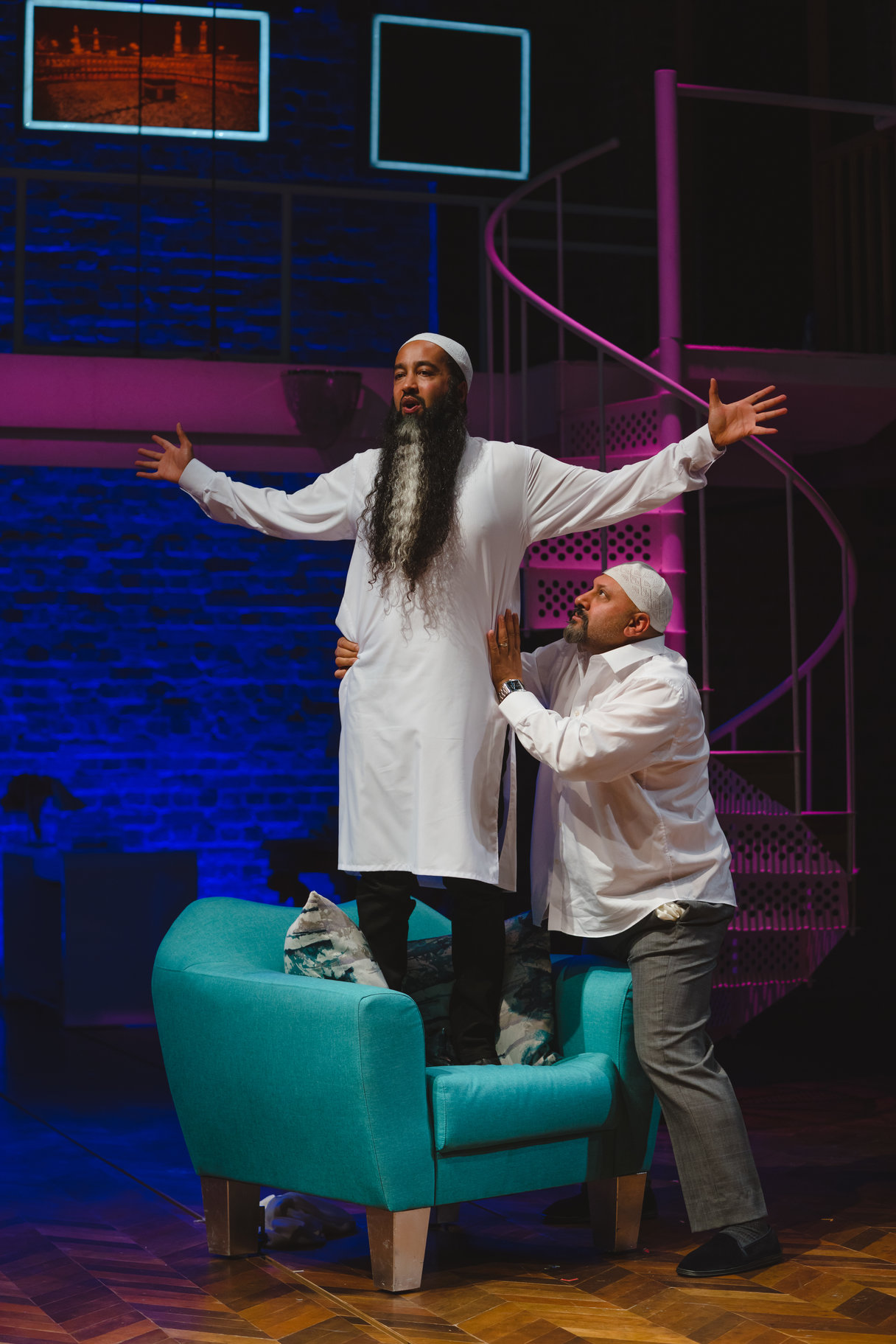 It is soon clear to all but Imran and his mother that Tartuffe is not the devout and pious man of faith he makes out to be. Spending most of his time on computer games, while trying to seduce Imran’s wife Amira (Sasha Behar), leaves the audience in no doubt that he is an imposter. Sassy student daughter, Mariam, and guileless son Damee seem destined to be thrown out of the house for failing to comply with Imran’s wishes, so it is left to Amira to show Tartuffe for the imposter he really is. The comic timing of the faux seduction scene, and the reluctance of Imran to emerge from his hiding place, is perfect, demonstrating farce, as it should be played.

Introducing Islam, rather than those operating under the guise of the Catholic Church, as was the case in the Moliere’s original play, runs the risk of causing upset. However, there is never any suggestion here that Tartuffe is anything other than a conman, who has chosen to play on the vulnerabilities of those who have cause for remorse. Asif Khan (Tartuffe) and Simon Nagra (Imran) manage to make the con entirely credible, while losing nothing of the comic pathos of the original premise. Michelle Bonnard as the all-seeing Bosnian cleaner Darina is perfect in holding the narrative together and delivers some of the most telling, comic and, in the ultimate epilogue, poignant messages of the play. There is no shortage of knowing laughter as she gets away with voicing her outspoken views on the basis that – getting a good cleaner is so difficult.

The rap from Imran’s son Damee and beat-boxing from Usman, Tartuffe’s assistant (Riad Ritchie), occasionally grates, but works overall in helping to make this a play that demonstrates that 17th Century issues still have great resonance today, while making it accessible and attractive to a younger audience. There is a very strong case for taking this play to the West End.