Review of: Vivaldi's The Four Seasons – A Reimagining at the Sam Wanamaker Playhouse

A quietly brilliant evening of music and puppetry.

The last new show to open as part of Emma Rice’s final season at the Globe was always going to appear unconventional – a puppetry-chamber concert hybrid based on Max Richter’s reimagining of Vivaldi’s The Four Seasons, created by the famed company Gyre and Gimble (responsible for the likes of The Elephantom, and the puppetry in the current production of The Grinning Man). To some extent, the piece feels like the successor to All The Angels (based on the music of Handel) which ran at the same venue in both 2015 and 2016.

But mixing a distinctly recognisable score with a new story is a tricky act to balance. Co-directors Toby Olié and Finn Caldwell are tasked with having to make sure that the refrains and leaps of Vivaldi’s music never interrupt the narrative being played out by their puppeteers on the forestage, while at the same time making sure that the concerti themselves are done justice. The pairing has to justify itself.

To that end, as a creative juggling act, the company succeed in spades. The Four Seasons, performed by a brace of string musicians, ties wonderfully into Gyre and Gimble’s nimble story, creating a varied thematic tone from movement to movement, pausing for melancholic clarity before leaping into frantic energy. It flows marvellously. Neither the music nor the stage performers vie for our attention; they co-exist, mutually constructing a loose narrative. 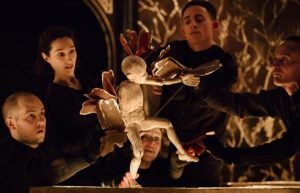 And it is the narrative where the piece comes to life.  Having begun the week by watching a disturbing, boisterous discussion on the life of refugees in Buggy Baby, here a similar story is created in an entirely different way – with a small family of wood-finished puppets (about a third life-size), grappling with the severe effects of war, displacement and loss. What this production does is, rather than just showing the very literal brick-and-mortar terrors of conflict, explore the psychological impacts of this trauma – the ramifications decades down the line when those who had to experience such events then have to deal with their legacy. It’s nonspecific, broad and intensely human, told without words, without real characters.

The production design, sparing where necessary, ties into this idea of a latent, spasmodic depression perfectly – the beauty and wonder of butterflies, created by simple sheets of red paper draped with gold leaf, reappear later in the show as darkened, clouded symbols of melancholy. The same objects that can appear enchanting are, all of a sudden, re-cast in a different light to become malevolent and intimidating.

Pared back, the production lets the physical gestures of its characters come to life in the candle-lit hall of the Sam Wanamaker. As befits the company, this is puppetry at its finest. Inspired by Japanese Bunraku figures, Gyre & Gimble’s performers know every ligament, every innate reaction of their characters. It becomes a dance, puppeteers flitting behind the characters yet always allowing the two-foot high puppets to lead the story. Olié and Caldwell also have a few powerful flourishes – when a child is wishing their mother back to life, we as an audience are aware that there is no puppeteer nearby ready to reanimate the dead. The piece melds the corporeal and artificial perfectly.

Seeing Vivaldi’s piece not simply reimagined, but also recharged and refocussed, adds a tense clarity, a tragedy to proceedings. An age-old classic brought to shed new light on a contemporary issue. As far as final shows in Rice’s season go, it’s a quietly brilliant evening.