Starring Jeremy Iron and Lesley Manning, this is a gorgeous production of O'Neill's heartbreaking masterpiece.

O’Neill’s 1940s heart-wrenching classic forces us to watch a family of four deteriorate over the course of one long summer’s day – mother Mary (Lesley Manville), father James (Jeremy Irons) and their two grown sons Jamie (Rory Keenan) and Edmund (Matthew Beard). Each character’s particular form of self-destruction reveals itself over the course of the night; we see Mary’s morphine addiction, Edmund’s consumption, Jamie’s alcoholism and James’s less obviously destructive miserliness come to light as drugs and booze slowly eat away at their self restraint. It is a play of constant conflict, both between characters and within them: one character can hardly finish talking before he is contradicted either by himself or one of his family members. Despite this, it is the obvious love within the family that delivers the true heartbreak as they try to resist each other’s demise. 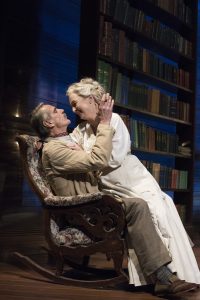 The production is framed by Rob Howell’s phenomenal set with modern, translucent walls clashing against the 1940s summer furniture and costumes. We can see the characters as they enter and leave, the walls provide little shelter from the ghastly world around them. There is no privacy and no homeliness: two things Mary longs for. The glass also manages to reflect everything on stage back at itself, adding a claustrophobia to the strange openness of the space – it is a set that perfectly inhabits the theme of contradiction, opposing itself, much like the characters it is containing

However, it is impossible not to comment on the length of the piece – O’Neill wanted the play to be performed un-cut, even going so far to stipulate it so in his will. However, in its full version the play sits at 3hrs30, and boy does the second half drag. The first act feels as though it is gradually building to the destruction of every character, but through slow deterioration rather than any one, pivotal event. The second half is driven less by conflict than by conversation, and at times this detracts from our ability to connect to the characters and with it, our ability to empathise with them. Littered with beautiful moments and tragic conflicts, it’s impossible to totally condemn it, but these sparklling moments were made all the less pertinent by the sheer length of time between them.

Despite it’s length, there is a real heart to the production – amongst all the struggles and self destruction, we see each family member mourn as they watch their loved ones move towards their own demise. Matthew Beard is a true hero throughout, mesmerising as the decaying Edmund, simultaneously moving and pitiful. The tragedy is, however, never more apparent than watching James’s horror at Mary’s relapse, having truly believed that this time she would stay clean. Iron’s performance is pitch perfect: at first he jokes – pretending more to himself than anyone else that she is fine. However, we see him watch her and unbearably evolve from gaiety, to accusation, to disappointment, to remorse. Indeed, the strongest moments of performance throughout the play are not in the extensive monologues, but in the stolen glances and sorrowful stares as Mary witters away. Her husband and sons stare mournfully at her, away from her, at each other: they get angry, infuriated that they allowed this to happen again – they blame each other, they blame themselves, they blame Mary.