Review of: A Girl in School Uniform (Walks Into A Bar) at New Diorama Theatre

For all the shadows and murkiness, this is an enlightening 80 minutes of theatre.

More Details
“It’s the future, but only slightly.” That’s what we’re told about the context of Lulu Raczka’s newest piece, currently running at the New Diorama. Dystopian theatre can always be a hit-and-miss affair – sometimes a small alteration on reality can throw open huge reflections on contemporary society, as occurred in the likes of Sam Steiner’s Lemons Lemons Lemons Lemons Lemons, while others are so painstakingly committed to the arduous process of world building that they never really end up feeling all that satisfactory, as occur in pieces like Philip Ridley’s grandiose Karagula.
A Girl in School Uniform sits somewhere snugly between the two, though certainly benefits from this position. This is in part because it relies on something so sensory yet politicised – our comprehension of the dark. Darkness, both in the play, and in our current lives, can present danger – danger of the unknown, but also a danger of what can be hidden. Darkness is also gendered – there’s a reason why, at the moment, it is predominantly women who are told not to go out at night by themselves. 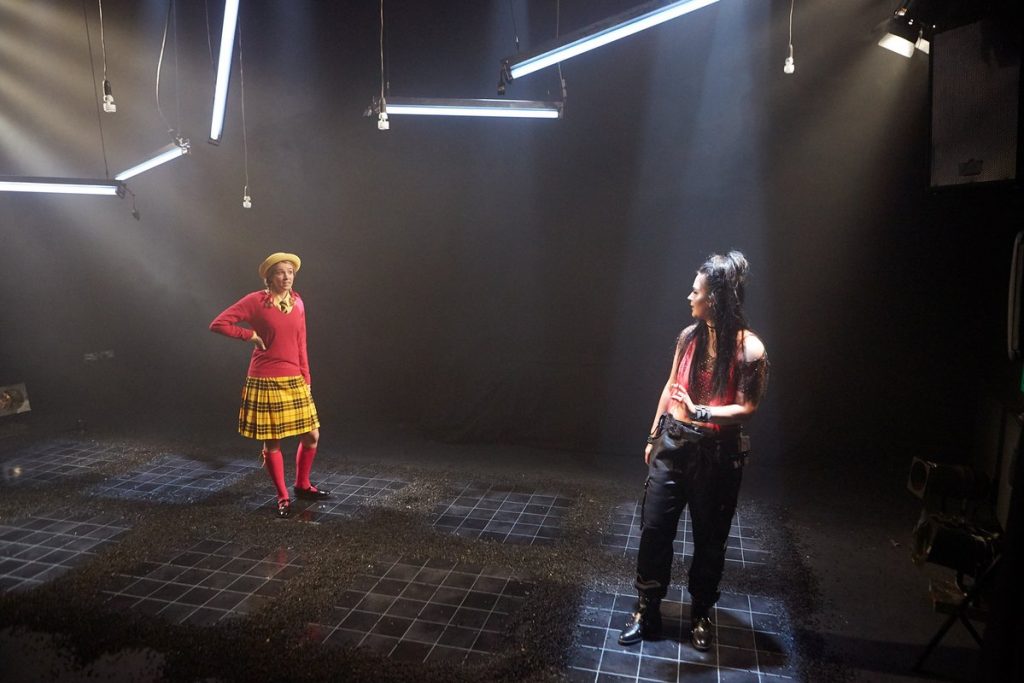 These ideas twist and coil through Raczka’s piece, a taut two-hander adeptly directed by Ali Pidsley. Steph (Laura Woodward) and Bell (Bryony Davies), a schoolgirl and barmaid marooned at a local pub in a sea of dark, in a world of rolling and unexplainable blackouts, look for their friend. It’s simple, punchy, and leads to a swathe of intriguing ideas – some that come from the fact a lot of the context is never fully explained, but often simply because the themes are so rich.
As Beth and Steph’s lives flicker, intertwine and they use their collective imaginations to create new stories and narratives. It has a faint resemblance to Ali McDowall’s Pomona, all noire and obsessed with the comforts of fantasia. But here it goes one step further – these are women, creating women’s stories, in a world that is utterly hostile towards them. And the stories shine when everything else doesn’t.
But what lighting designer Peter Small does isn’t just create darkness, he creates utter blackness. It’s nervy, disorientating, and blurs the line between performance space and audience area. It makes the space feel simultaneously very claustrophobic and very large. We are all experiencing this lack of sight simultaneously. It renders us defenceless. It’s a politicised piece, the sort that dystopias exist for. For all the shadows and murkiness, this is an enlightening 80 minutes of theatre.