Review of: The Brothers Size

Mesmerizingly poetic portrayal of masculinity and brotherhood in the Deep South

The Brothers Size ran to great acclaim at the Young Vic in 2008, way before Tarell Alvin McCraney bagged an Oscar for the exceptional Moonlight in 2017. It’s re-emerged with a highly-anticipated return in the Young Vic Main Space and boy, is it worth a watch. The general shape of the narrative follows Oshoosi (fresh out of jail) and his developing relationship with brother Ogun – hard-working, serious, and as rigorous as Oshoosi is free-wheeling. Enter Elegba, Oshoosi’s friend from prison, scoffed at and distrusted by Ogun, and the trio is complete. 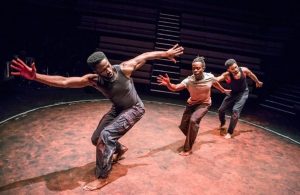 There is something profoundly metatheatrical and utterly poetic about the piece. The rhythm of the lines and the beat of the words is mirrored by the steady pulse of movement around the set – at some points we get the feeling we’re in a bullfight, or a kind of duel, with actors circling each other onstage as if enacting some invisible tug-of-war over the red dust. It’s mesmerizing. Any layers of props or solid objects have been stripped away, leaving the power of words laid bare for all to see. This forces us to focus on the exact syllables and relationships in a way that can feel Brechtian at times – actors apparently stepping out of the play world to read stage directions before re-immersing themselves, switching effortlessly between the two realities. It quickly creates a world built on raw pillars of emotion, and because of the scarcity of the set there’s nowhere to hide.

Jonathan Ajayi is electric as Oshoosi – fresh out of drama school he captures the energy and borderline naivety of the newly-release prisoner with a refreshing honesty. Sope Dirisu is gorgeously aloof as Ogun, and Anthony Welsh (the only returning cast member) spectacular as the seductive Elegba. The Brothers Size questions what ‘brothership’ really means – socially, genetically and emotionally – contrasting two different pairs of men bound together by different experiences. Ogun and Oshoosi are biological siblings and connected by the death of their mother, with Oshoosi and Elegba bound by the ties they forged while in prison. Focussing on the stereotypical portrayals of black men the piece digs beneath this stereotype, exploring the limits and the nuances of masculinity in the Deep South. A triumph