Chivaree Circus’ show Becoming Shades is a circus adaptation of the myth of Persephone, told through live music, physical theatre, aerial acrobatics, and fire. The show has a full run coming up at VAULTS festival, and we caught up with director Laurane Marchive to see how it was all going.

How is everything going in preparation for Becoming Shades opening?

Great thanks! It’s really exciting to be doing this production with an all female cast, some really powerful and awesome women are in this show. Right now the real creative period of rehearsals is just about to start and we can begin to bring abstract ideas into reality. Half of the crew have worked together before so it’s also lovely to come back together: a little family that expands and contracts.

What was it about the story of Persephone that inspired Becoming Shades?

The show is quite different to traditional theatre – it’s an immersive journey mixing circus and live music. We wanted to make a show that was built up of cyclical patterns and tableaus rather than a traditional linear narrative. The story of Persephone is the Greek origin story for the seasons so it seemed like a perfect narrative to explore in this form. Plus it deals with archetypes and you can deconstruct them while they still remain recognisable. Traditionally this is a story that exists on different levels, it’s about the coming of age of a young women, but through something violent – we wanted to invert this into a version which gave the character of Persephone her own agency, to empower her and make this a story told through her perspective.

How did you go about creating the show from the myth? 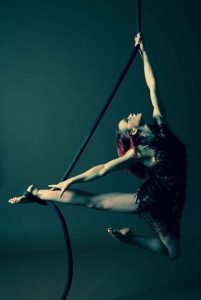 A lot of thinking abstractly and discussions between us, trying to identify the key elements of the story – what did we need to have in there and what could we add or take away. One name for Persephone is The Queen of Shades which is where the title comes from, so we wanted to make this a darker story of going into the underworld, of love, choices and loss. The show is non-verbal, so we really wanted to build the energy of the show around the music. Composer Sam West is incredible and the music is performed live each night – he built the score like an opera; so the first time you see the character of Persephone is the first time you hear the female vocalist, the first time you see Hades is the first time you hear the male vocalist, the first time they really come together is the first time the vocals harmonise. And it’s constantly evolving. Doing the show with an all female cast means we get to ask more questions – with the characters of Persephone and Hades mirroring each other and becoming the ID and the Ego that needs to be unified in the central journey. Hopefully with some incredible circus and aerial acrobatics along the way!

It’s the 250th birthday of the modern form of circus this year – what do you think Becoming Shades offers that’s new to this art form?

It’s a big date in the calendar for our art form. It’s also 100 years since women were conditionally given the right to vote, so telling a story with circus and an all female cast about female empowerment feels like a fantastic way to celebrate this. Because we are also mixing immersive theatre with circus it’s a very modern story. Traditionally circus is in the round with the audience looking in, but immersive theatre puts the audience in the centre with the action around them in 360 degrees so Becoming Shades is a marriage of these two opposing forces.

What’s exciting to you about performing at VAULTS, and being one of their full-length shows running for the whole duration of the festival?

VAULT Festival is really one of a kind. It’s special. The space is incredible and the team are fantastic; they really support companies and give a platform to try new things. There is a huge variety of different types of theatre and performance. And it’s great to be bringing circus to the mix. Before we were working with VAULT festival we used to come along and see great shows and enjoy the parties – and Becoming Shades was written specifically with the festival and venue in mind. So we can’t wait!!

What else can audiences expect?

It feels like we’ve given quite a few hints above – and we want a lot to stay a surprise. There are a series of reveals and we want people to get to discover them on their own. But the show is a mixture of three elements: immersive theatre, exciting circus with acrobatics, aerial and fire and the live music which is gorgeous, a pulsing mixture of operatic vocals over electronic influences. All three of these drive the action so it’s a really sensorial experience which we hope you’ll love! We want to give people a sense of wonder and an environment they can get lost in.