Underbelly has announced the return of Underbelly Festival for 2018, which will see them mark 10 years on London’s Southbank having broken through the one-million ticket barrier in 2017. 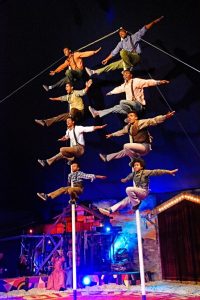 Over the past decade Underbelly’s occupancy of the Southbank has been a sure-fire sign that summer is on its way, and its mix of electric live entertainment and some of the capital’s most buzzing outdoor drinking spaces has made it one of London’s most popular festivals.

Ethiopian Dreams – what the critics said:

The second company bringing a sensational new show to the Southbank will be Circa, the Australian giants of high-concept theatrical circus, who will present the UK premiere of a brand-new circus-cabaret Peepshow having previously performed on the Southbank with Beyond and Close Up.

Peepshow turns cabaret on its head, literally, lurching from the thrillingly acrobatic to the comically playful. Expect teetering towers of balanced bodies, extreme bending and devilishly precarious aerials from a company whose legendary productions have attracted over a million people since their inception three decades ago.

These two shows will be joined by another mystery headliner to be named soon alongside a host of the very best talent from the worlds of comedy, cabaret, circus and family entertainment, all taking place across two unique venues set beside some of the capital’s coolest outdoor bars.

“It’s our tenth year on the Southbank and the announcement of today’s headline shows are a statement of our intent to make it the best ever.

“Circus Abyssinia were the talk of this year’s Fringe and rightly rewarded with a spot on the Royal Variety Performance so it’s a joy to be giving them their first London run, while Circa are legends in the circus world and it’s a huge privilege to have them with us once more with what could be one of their most breathtaking shows ever.

“Beyond this we’ve got some very special plans for our tenth year on the Southbank, more of which will be revealed in early 2018, watch this space.”