Review of: Heather at the Bush Theatre

Great central performances, but the central shortcoming mean it is easy to walk out of the theatre with it fading in the mind.

Thomas Eccleshare’s new play ‘Heather’ tells in three scenes a twisted story of a first-time children’s novelist. In the first scene, the young writer, Heather, and her prospective publisher read the emails they have been sending one another, from the first germ of the publisher’s interest to Potter-style mega-selling. We are primarily engaged by the author’s odd reclusiveness – her refusal to meet the publisher, attend launch events, or do face-to-face interviews. But mere stage fright this is not, as revealed in a rather sudden and extreme ending to the first scene, continuing into the second scene in which the publisher and the author finally meet face to face. 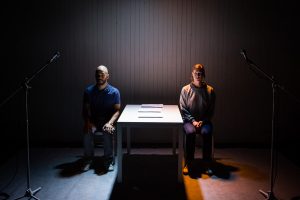 These two scenes never quite convince. The first is not quite comic enough to provide the light precursor to a heavy twist, and so we are not invested enough for that twist to fully hit home. In the second the actors do not quite release themselves from the stilted epistolary form of the scene before, and so some good dialogue is delivered oddly vacantly. This is all particularly troublesome because the twist, and therefore in a sense the play’s premise, is slightly preposterous, which becomes more noticeable in a production not otherwise thrilling. The overall effect is to leave us somewhat cold and detached in the crucial moments.

The play picks up in the third and final scene, in which the climax of the film adaptation of Heather’s concluding novel is dramatised before our eyes. Here the actors are dynamic and enthralling, transporting us extremely skilfully from a small studio theatre to the vast world of the fantasy blockbuster. Crucial themes from the previous scene are woven deftly and surprisingly into the action, bringing an interesting resolution. Iain Armstrong’s sound design suddenly comes to the fore here, and it is a highlight, superbly evoking Alexandre Desplat’s epic Deathly Hallows score. The running Harry Potter joke in the script, however, is slightly overplayed, with Heather’s story so derivative that we lose the sense that this actually could have been made without a copyright violation. This is a shame because the teenage fantasy parodies are often good for some nice laughs, and this final scene certainly exudes the fun and verve of that familiar genre.

There is enough to engage audiences here, and the performances and atmosphere are good. For some the play may merit some real thought and preoccupation after viewing. Unfortunately, the central shortcomings mean it is just as easy to walk out of the theatre with it already gone from your mind.