The cast and creative team is announced today for the London premiere of the new British musical SIX that sees the 6 wives of Henry VIII singing their way out of the history books and into the West End spotlight. From Tudor queens to pop princesses and with songs including Ex Wives, Haus of Holbein and Don’t Lose Ur Head, this pop concert remixes 500 years of historical heartbreak into one hour of 21st century sass.

The cast consists of: 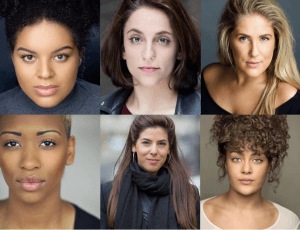 Aimie Atkinson (Katherine Howard) who was Daniela in In The Heights, Elizabeth the lead in Dirty Dancing and won the BBC Voice of Musical Theatre contest.
Izuka Hoyle (Catherine Parr) who was Selena in the musical Working at Southwark Playhouse. She was also  Stephen Sondheim Society Student Performer of the Year 2017.
Renée Lamb (Catherine of Aragon) who was Roz Keith in the musical 9 to 5.
Genesis Lynea (Anna of Cleves) who is best known as series regular Maddie Harper in The 4 O’Clock Club, the CBBC series about hip hop and homework.
Christina Modestou (Anne Boleyn) who was Nina in In the Heights, in Shrek and Urinetown and covered and played Killer Queen in We Will Rock You.
Natalie Paris (Jane Seymour)  who was Louise in Sunday in the Park with George at the Menier Chocolate Factory and appeared in West End musicals Billy Elliott, Chitty Chitty Bang Bang and Les Miserables, as young Cosette.

SIX started life with Cambridge University Musical Theatre Society at the Edinburgh Festival Fringe 2017, where it was nominated for the inaugural Musical Theatre Review Best Musical Award. The original production, directed by Jamie Armitage, attracted the attention of producers Kenny Wax and Global Musicals, who are presenting this all-new production for the show’s professional premiere at the Arts Theatre in London on 18 December, 8, 15 and 22 January.

Writers Toby Marlow and Lucy Moss said: “This really is a dream come true. We’d like to thank Prince Harry and Meghan for announcing their engagement this week and helping raise interest in Royal brides to fever pitch – although they haven’t got back to us after we offered to provide entertainment at the wedding!”

Toby and Lucy met at university, where they spent three years making theatre together and neglecting their degrees. In January 2017, they made their first foray into writing as a duo with the musical, SIX. Following the show’s success in Edinburgh, they are incredibly excited for its debut at the Arts Theatre. The team also make up two-thirds of the award-winning theatre company Hot Gay Time Machine, whose show, Hot Gay Time Machine, enjoyed considerable success at the fringe this year, and a sold out run at The Other Palace in November.