A brilliant new play to herald the opening of a stupendous new theatre. Rory Kinnear (Marx) and Oliver Chris (Engels) are a double act with great comic timing in a play that is both hilarious and touching.

The danger in reviewing a new play at a brand new theatre is that one focuses too much on the theatre and not on the play.  However, the process is much easier when both are exceptional.  The Bridge Theatre reportedly cost £12 million to build and, as the first new commercial theatre to open in London for over 20 years, this looks like money well spent.  All 900 seats have good views, and the décor is both stylish and comfortable.  Visitors to London will be blown away by the fantastic views across the river of the night-time London skyline. 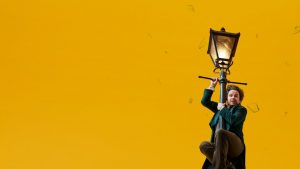 As for the first play, given that one of the co-writers (Richard Bean) and the director (Nicholas Hytner) were behind One Man, Two Guvnors, there was a risk that expectations would be running at levels that could not reasonably be satisfied.  Young Marx is, however, a triumph.  Set in 1850’s London, we find Marx impoverished, trying to pawn his wife’s teapot, struggling to commit to his writing, as well as to feed his children and fund his drinking.  There are, however, many (including Engels and Marx’s wife Jenny) determined to return him to the bigger cause of overthrowing capitalism, rather than allow him to take a job on the railways.  The need to contend with Prussian spies, a mole in their camp, Marx’s infidelities (one threatened and one real) and the lurking bailiffs presents more than enough material for a great comedy.  This is not grand farce on the lines of OMTG (although a mass brawl in the British Museum comes close) but it is genuinely funny and very clever.  Rory Kinnear excels as Marx, and the double act with Engels (Oliver Chris) works alternately as a music hall turn and creative intellectual force.

Victorian London is perfectly replicated in the grand space of the new theatre, with a set design up there with the best productions of the National Theatre, and the use of crunching guitar music between each scene does not seem incongruous.  There may be some use of dramatic license, with a dueling scene imagined in Hampstead rather than Belgium, and here Marx has only two children, but the essence of the story is not only compelling but largely true.

Marx’s oft quoted view that Hegel’s point about historical personages and facts appearing twice needing the added clarification that they do so once as tragedy and “the second time as farce”, is to some extent reversed in this play.  What starts out as farce, with much badinage with pawn-brokers, peelers and bailiffs, becomes tragedy in a way that is touching and poignant.  Well worth trying to get a ticket, and if you can’t it will be shown in cinemas on 7th December.