Review of: The Terrible Infants

Aesthetically stunning this show may be, but there is too little in the essence of the stories being told to satisfy.

The Terrible Infants sees LET return back to the smash-hit of 10 years ago, creating a style that has seen numerous copycats spring up in an attempt to recreate their consequent successes. Grotesque makeup, impeccable choreography and beautiful puppets intertwine to explore children’s stories in the manner of Shockheaded Peter– Tilly whose lies beget her a large, hairy tail; Thingummyboy who is so shy he disappears altogether. It is clear the atmosphere of the piece is meant to resemble anarchy, a jumble of stories hurled onto the stage, vying for attention before being dashed away by the ensemble cast of five. However, this never truly succeeds. It is very clear that, as an audience, we are looking at a company’s beautifully wrought resemblance of pandemonium – every beat and click polished to perfection; mayhem gentrified. Aesthetically beautiful the piece may be, but over the last ten years it seems to have lost its soul. 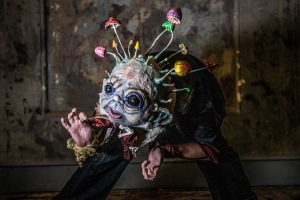 This is not to say that there are not wonderful moments. Musically, both Becky Bainbridge and Christo Squire are phenomenal, with just the right amount of oomph to keep the piece moving in sluggish moments. Bainbridge’s rather virtuosic violin playing is a particular highlight, and she definitely adds a whole lot of pace and steam when she muscles in with her ensemble moments. This is not to say that the others are not good -Oliver Lansley is triumphant (if overblown) as the leader of the ensemble, with Serena Mantaghi and Richard Booth staging interventions now and then – but the feeling of chaos is simply not there. The odd conglomeration of childrens stories seems equally bizarre; there is no one under 18 in the audience, and while the group assign so-called ‘morals’ to the tales it all feels somewhat fragmented. One has very little idea why on earth these stories are being told, and why we as an audience should care

The puppets and the set design themselves (by Sam Wyer) are both masterful, but they overawe the tales that are being told and steal much of the spotlight. These piece feel like they are being given to the audience as an ‘excuse’ to create something aesthetically beautiful, and not that this artform was chosen as the best way to communicate this idea. As an audience member I cannot help but vastly prefer most of LET’s other work, which seems to have a point within the theatrical piece that didn’t just boil down to showing off concept. This is the embodiment of style over substance; and while the style is utterly beautiful the shallowness of the actual meat of the piece left this reviewer unsatisfied.