Adaptations are a tricky thing, you have to draw in new audiences whilst keeping old acolytes onside – a daunting balancing act for source material as sacred as Jane Eyre. Treating the book with too much veneration and adapting it as such would, counterintuitively, do it a disservice. A play or film must be its own thing if it’s not to be found wanting when compared to the original – think Andrea Arnold’s Wuthering Heights over Joe Wright’s Pride and Prejudice. However, I’m happy to report that Sally Cookson’s production devised by the Bristol Old Vic company succeeds with aplomb. Here it is revived with a newly minted touring cast and Nadia Clifford taking on the role of the diminutive heroine. 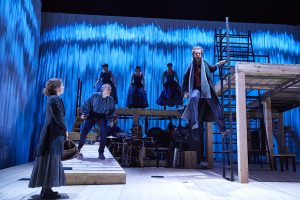 A jazzy prologue introduces the horrors of Gateshead house and the spartan Lowood boarding school. We are quickly acclimatised to the book’s most salient scenes on a raked pinewood stage. This is inside-out theatre and Jane’s interiority, her ability to be ruthlessly honest with her own private self is one reason the novel still resonates while other similar tales have fallen away. This interiority, one that film adaptations have failed to capture, is here handled by having the fellow players acting as her mind’s interlocutrice – interrogating her at various points especially when it comes to her imperious employer.

The heart of the piece is the meeting of minds between Jane Eyre and Edward Rochester, and how the urbane yet isolated lord of the manor finds his equal in a plain orphan girl. He recognizes in her something fierce and unbridled, something which will not brook convention – that remains spirited despite life’s many attempts to extinguish her flame. But Rochester is a man so wrapped in self-loathing he cannot acknowledge the happiness in front of his own face. Jane’s proto-feminist perorations first commandeer his head and then finally his heart.

To get there every trick in the Brechtian playbook is used. Actors doing double duty as lighting rigs, carriages, and windows; the infamous red-room with all its Jungian implications is brought to life with gothic intensity; Paul Mundell is hilarious as Rochester’s faithful companion Pilot, wagging his ‘tail’ to the delight of the crowd. It can be too much of a good thing. Lines from a 19th century novel, with 20th century staging, left this 21st century audience laughing at unintentional moments. Unprimed as they were for the seriousness of it, turning key utterances parodic.

The operatic arrangement of on-the-nose pop songs (Gnarls Barkley’s Crazy, amongst others) are sung with such pathos by Melanie Marshall that she redeems them. But a musical accompaniment scoring every emotional beat undercuts rather than accentuates the actors’ fine work – Clifford exudes the ache that Jane feels for her hitherto platonic companion and Rochester’s appetite for destruction is manifested by a magnificently hirsute Tim Delap. Go see it.