‘Have you ever done anything like this before – Dungeons and Dragons, roleplay?’ I turn slightly pink, shake my head and wonder what the hell I’ve got myself into. Being whisked into the corner and pondering between being a ‘rogue halfling’ and a ‘human fighter’ (rogue halfling, obviously, what do you take me for) isn’t a pre-show ritual I’m really used to. But hey, it’s the Fringe, if you don’t find yourself completely out of your depth at least once a week you’re doing something wrong. 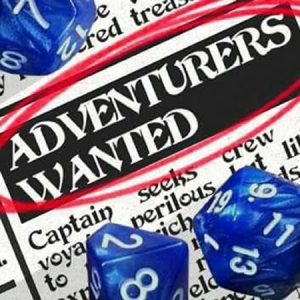 And so began my introduction into roleplay adventure games. This particular group are notching up a whacking 250 hours of a game, a kind of continually evolving story where everyone makes decisions based on the story-arc as determined by the gamemaster (please forgive me if my definition are wrong) and dice. Unsurprisingly, considering the considerable fear that is inspired by the ‘interactive’ part of the description, I was the only one of the small group who opted to actually play in the game. And it sadly soon became very clear that, notwithstanding the fun I had and the group’s skill at gameplaying, as an actual experience it was sadly lacking.

As Peter Brook once so astutely observed, performances needs both performers and audience. The issue was, although I myself was having a great time, everyone watching just felt utterly left out. When the same group of people play something for 250 hours in-jokes and camaraderies develop that make the entire thing feel like you’re eavesdropping on something private, awkwardly standing around the outside rather than participating. Had the group committed to the idea of role-play, not given spectator and player tickets and twisted it to suit newcomers coming in, it would have been fantastic. As it was, it was no surprise to me when all bar one of the small audience left before the end.

In pushing it as a theatre show, there needs to be an agreement with the audience – there was not. No-one on the game table made even the slightest attempt to involve anyone sitting on the chairs. The people I met were lovely, I would definitely go back to continue Stoneface halfling rogue’s story. But it just felt like piggybacking on someone’s Monopoly game when they would just rather play it themselves. Asking people to pay to watch it feels utterly wrong, and it needs something a lot more actually interactive in order to develop as an experience.