HYENA is a touching piece of female-empowerment themed circus, which unfortunately fails to wow its audience as much as it should.

HYENA promises a “synchronised display of sisterhood, strength and power”, harnessing circus to smash the patriarchy. The show is created by Jacksons’ Lane Associate Artists Alula, who are the world’s first all-female Cyr troop. and the show is built almost entirely from routines with the heavy-duty metal rings. Whilst many of the skills on display here are impressive, as a whole the show fails to make an impact inside a venue that swallows up any atmosphere created.

Whilst the promised social message is not obviously apparent, and perhaps watered down a little from its marketing copy, this “circus of sisterhood” does offer moving sequences. Circus at its best is compelling in its simplicity – the spectacle of human endeavour and cooperation can be powerful in of itself. In HYENA, watching these female performers united and triumphing through their teamwork is an affecting experience, and perhaps this is all the social message this show needs. The sight of this real, human connection holds enough meaning. However, these moments of unity are also peppered with interludes that are intended to show the performers’ relationship, but are considerably weaker. 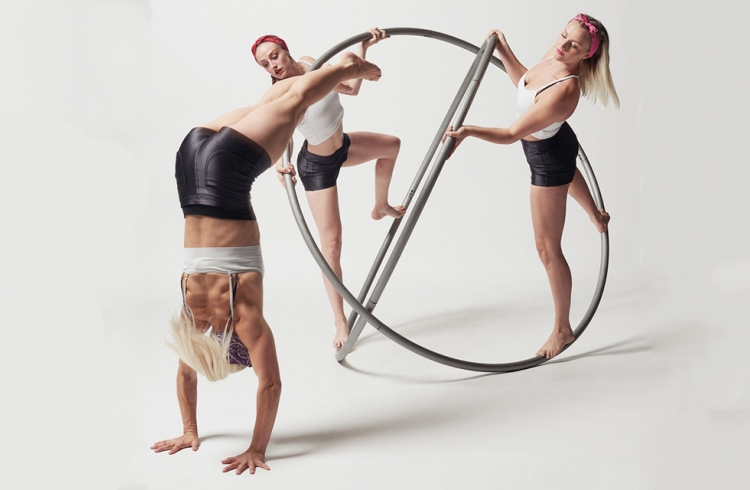 One feels the show would have benefited from stronger direction – the pacing is a little uneven, and often set pieces peter out instead of exploding spectacularly. Part of the problem is in presentation – in some cases, the climax of a sequence is missed because we are uncertain if there is more still to come. Elsewhere, a flourish is given more space than the audience necessarily feels it deserves. At one point, a sphere is created out of the three Cyr hoops interlocked – but this promising set-up is not followed through. The show has too few “wow” moments, and takes at least fifteen minutes to hit its stride. The result is a polite applause which feels as though it has been prompted, rather than inspired. This mismanagement of impact is not helped by an occasionally erratic lighting design, with one episode being accompanied by excessive and not particularly appropriate strobe lighting.

The Spiegeltent is a far from ideal venue for this show. The Underbelly Festival continues to have problems with soundproofing – but here the additional noise (which meant the intrusion of Copacabana on one of the show’s more silent moments) did not come from audience members outside but from music pumped out to an empty hub. It is usual for the Underbelly to be hampered by atmospheric noise, but here the problem was utterly unnecessary and all the more frustrating for it.

These are three skilled and impressive performers – but unfortunately here this does not add up to a skillfully-created show.