Review of: Our Ladies of Perpetual Succour at the Duke of York Theatre

Catch Our Ladies before the experience no longer offers itself.

And lo, the long adored and bombastic Our Ladies of Perpetual Succour, Lee Hall’s irreverent yet revered piece (based on 1998’s The Sopranos, by Alan Warner) about six schoolgirls who swear and drink their way across Scotland on a choir trip, reaches a form of apotheosis with a West End run at the Duke of York. It seems almost the perfect conclusion to a two year trip that started back at the Traverse Theatre during the 2015 Edinburgh Fringe, a trip that has included spells at the National, a Fringe First Award and, most recently, an Olivier.

The buzzing sense of energy that the show constructs is akin to a mild intoxication – catalysed by the invitation to have some audience members on the stage, surrounded by empty bottles of sugary drinks (invariably used as mixer for more spirited substances) or McDonald’s wrappers. Even before any performers emerge the excitement was palpable.

What ensued, therefore, over the hundred minute or so performance managed to deftly maintain this sense of energetic poise, while digging into heartfelt and earnest realism. We hear stories of unwanted pregnancy, unprotected sex, cancer diagnoses, and, beneath it all, an innate angst regarding the future. It’s a subtle, unresolved narrative thread that gives the show its freewheeling character, but Hall manages to keep the action ticking over with relative ease, particularly when interspersed with the variety of vocal interludes, especially the selection of ELO’s greatest hits. 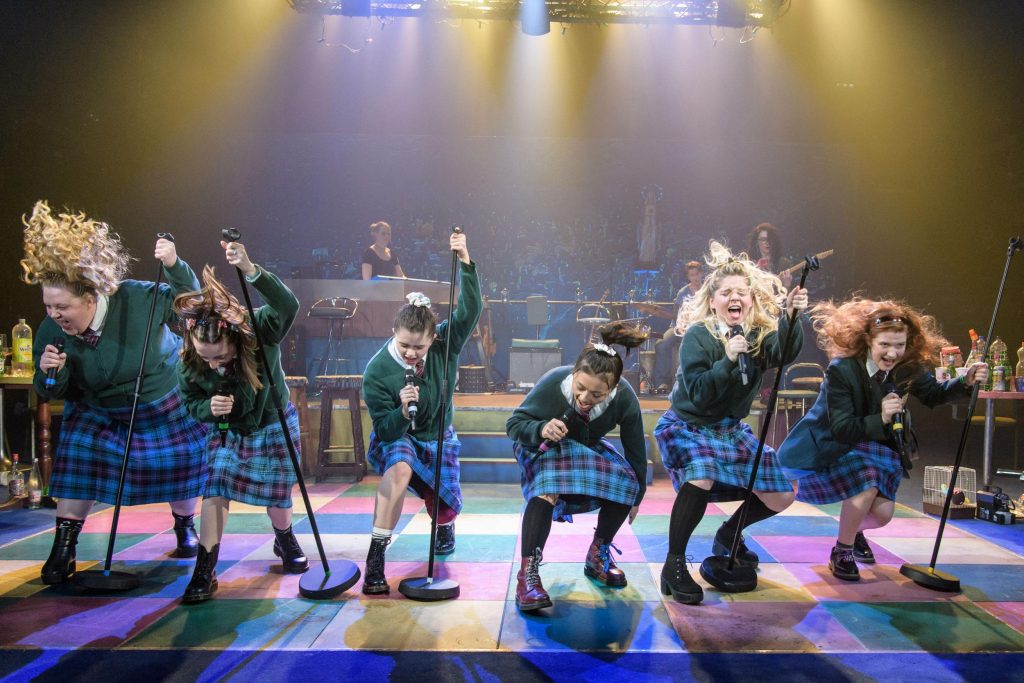 This is not didactic theatre, it is obsessed with the experiential – the drugs, the fireworks, the alcohol. One monologue, regarding a sexual encounter in a cancer ward, stands out for its entirely unapologetic anecdotal form, drenched in so many elements that, in any other context it would affront modern sensibilities. Isis Hainsworth delivers it with ease. It’s to the credit of director Vicky Featherstone that she decides, with impunity, to block the monologue centre stage in something of a cavernous Duke of York, leaving the actor alone on the stage for the entire episode.

Featherstone in general grapples with the large venue easily, aided by designer Chloe Lamford’s decision to provide a lower rig and constrict the sides of the stage with audience members, fluidly demarcating a performance space of a suitable size.

Hall’s fault may be in length, his ebbs and flows create the illusion of a narrative conclusion before it comes, meaning some of the later passages of the play feel more like epilogues. Perhaps this is meant to be the case – there is no ending, or a satisfying result – only an inexorable passage of time, of events, experiences, each continuing on. Catch Our Ladies before the experience no longer offers itself.