Review of: Posh at the Pleasance Theatre

Despite possessing a finale that doesn't quite pack a punch, 'Posh' at the Pleasance Theatre is an enjoyable adaptation of Laura Wade's dark comedy.

When Posh was first performed at the Royal Court Theatre in 2010, Laura Wade’s timely and scathing portrayal of the somewhat fictitious Riot Club was a sensation. Based on Oxford University’s infamous Bullingdon Club, this dark comedy examined the ruinously entitled nature of the privileged during the crux of the 2010 general election, providing unnerving social commentary as ex-members of the Bullingdon Club were seizing control of the political landscape. Seven years later, Can’t Think Theatre Company presents the world’s first all-female version of the play, during a time in the theatre industry where women performing traditionally male roles are becoming more regular and celebrated occurences. Before its opening night, the production had already faced some challenges (though not those that are considered in this review): Hannah Murray (of Game of Thrones and Skins fame) had to leave production due to personal reasons, and the show’s producers came under fire back in February after advertising a company stage manager position that would be paid a meagre £250 per week plus profit share. Due to the play’s successful history, the new directorial angle and the production’s current press, Posh needed to be, and could have been, a runaway hit — unfortunately, it didn’t quite pack the emotional punch that the play is ultimately known for. 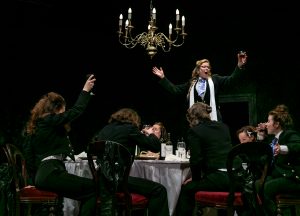 Before this production began, there was an air of excitement as to what an all-female cast could create; the idea of combining such ferociously elitist subject matter with a dash of gender politics would certainly be an enticing prospect. However, Director Cressida Carré decides to stay incredibly faithful to the 2012 West End version of the script, keeping the male character names and using ‘he’ pronouns. Although potentially disappointing for some, this doesn’t ruin the production at all, as performing the script verbatim can still be an enjoyable experience, as the play is incredibly strong. To me it appears that Carré was perhaps more focused on presenting the fact that women can command a stage just as powerfully in a male role as their male counterparts, rather than injecting an additional sociological debate into Wade’s play. What is slightly disappointing, however, is the fact that the cast did not seem to be pushed to emotional extremes when the scenes demanded it. The comedic aspects of the production were wonderful: hearing the same ten actors garbling “mate” to each other over and over again could become tedious, but the cast hilariously carried off the egregious dialect. Verity Kirk was particularly delightful as bumbling newcomer Ed Montgomery, whose exuberant and over-friendly mannerisms stole the spotlight during the majority of comedic scenes. 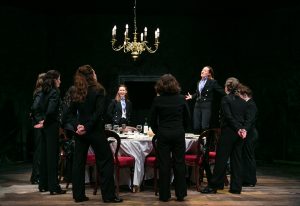 On the other hand, comedy is not all that Wade’s script requires, and where tension, derision and mania is built through her words, the performances didn’t quite match. There was certainly strength and power present onstage — Serena Jennings’ performance as Alistair is of particular note, as her voice dripped with condescension and disdain for those deemed too unworthy to deserve the so-called free rein that society had provided for them. But despite these examples of fabulous character work, the play’s finale didn’t provide the kinetic spark needed to fully justify the boys’ ultimate descent into chaos and anarchy. This was perhaps also due to the fact that the combined effort of the set design and fight choreography didn’t seem to emulate the physical destruction that the script implies. Without giving away too much of the play’s dramatic crescendo, the boys decide to wreck a dining room in which they have been spending their evening, horrifying the owner of the establishment who has been more than gracious to them throughout the night. Although it is understandable that there might not be the budget to destroy set pieces night after night, what we are left with instead is a few upturned chairs, a semi-collapsed table, and a slowly lowered chandelier. During a later crucial fight sequence, instead of using knaps to simulate a real fight, punches are thrown wide into obviously thin air. The effect of both the choreography and the set use results in a slightly fizzled finale, where the dramatic tension that has been created by the actors seems to somewhat dissolve.

Laura Wade’s Posh is a play that can incite laughter and horror by merely reciting the words — it shows the true strength of her writing that her dialogue can carry the real weight of a performance, should it need to. It is therefore such a shame that this production could not wholly emulate that same strength. Although the cast members certainly have a rapport with each other, resulting in excellent onstage chemistry, and also have great comedic timing, it is the more dramatically horrendous moments of Posh that are sadly denied their full emotive potential.

‘Posh‘ will be continuing its run at the Pleasance Theatre until Saturday 22nd April at 7.30pm, with 2.30pm matinees every Thursday and Saturday.