Review of: The Plague at the Arcola

When Neil Bartlett announces a new adaptation, it’s now convention to sit and watch – his versions of Splendid’s, La Dispute or Berenice firmly fixed in French-translation canon for maintaining the purity of the original text while guaranteeing a fit for modern audiences. The Plague, reconfigured (while still entirely using Camus’ own words) from the 1946 novel La Peste, has placed itself alongside its genealogical siblings, losing little of the original vigour and symbolism of the novel while developing startling and often unsettling connotations in this modern world.

Camus was often shackled with the challenge of having to justify why the original book both was and wasn’t a reaction to the fascist movements of the 1930s and 40s, a moniker that gave the text much of its acclaim. But as Bartlett himself points out (both within the play text and during a Q&A session at the Arcola), if the piece was entirely focussed on the Second World War and the political movements housed within, it would not, perhaps, have continued to be so strikingly relevant. Stop me when it sounds familiar – a story about a medical outbreak, and the stretched and overworked individuals desperately putting aside personal investment for the sake of caring for others, while derided and underrated on a macro level, working in extreme and underfunded conditions for often extensive shifts with little break, both emotional or physical. The parallels with our modern NHS were almost too notable here – the parable eclipsing the genuine narrative played out over 75 minutes or so.

La Peste is reconfigured, now contained within an ‘enquiry’ – five individuals retrospectively surmising the events over the last year – the spontaneous and overwhelming outbreak of a specific fever, claiming the lives of hundreds in a later-quarantined town. Bartlett strips away Camus’ exposition – it could be any town, in any country (rather than the North African name given in the text) – emphasising the universality of the ideas at play. We follow principally Dr Rieux, played here by Sara Powell with a convincing sense of both medical efficiency and latent grief (having to deal with the illness of her own wife, inaccessible on the other side of the quarantine). Rieux spearheads the attempts to treat the wounded, with desperate measures including placing them in camps with little support or infrastructure able to combat spread of infection. 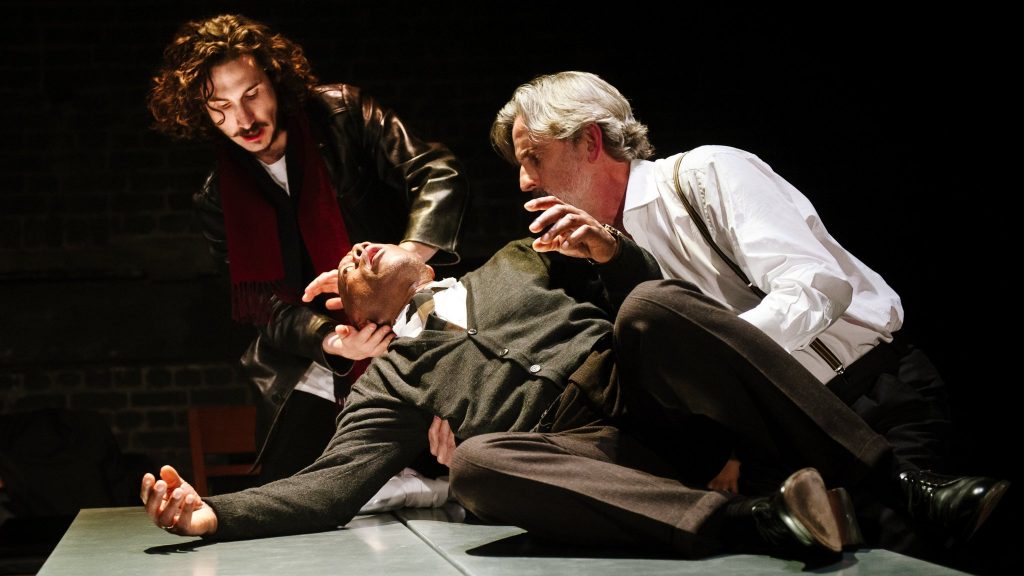 It’s a harrowing piece, with some of the sound design from Dinah Mullen being particularly effective in driving home the human consequences of the illness. What is more striking is how little agency these characters have – faced with a spontaneous explosion of sickness, desperately hoping that a) a vaccine will arrive and b) that it will actually work. Even if the plague stops, what sort of normality do they return to – what choices do they have left to make.

The ensemble of five were synchronised here – capable of constructing the timbre and style needed to make the show work on bilateral levels – both symbolically and personally. The two tiers clashed at times, but Camus’ vision remained pervasive throughout – right the way to the closing lines. If there are faults here it may have been the pacing – Bartlett’s direction builds slowly, perhaps too slowly, meaning the sense of hysteria is never as gripping as the moment of grief and pause. More contrast may have been perfect here – what we were presented with was instead a melancholic resignation. Certainly a show for 2017, in that regard.