Review of: Out of Blixen

Riotous Company bring four short works by Karen Blixen to the stage, in an inconsistently paced production which nevertheless brings the art of storytelling to life.

In Out of Blixen, the extraordinary Kathryn Hunter brings four of the short stories of Karen Blixen – baroness, writer of Out of Africa and coffee plantation owner – to the stage, directing and performing alongside a talented ensemble which includes her husband and Complicite co-founder Marcello Magni. Whilst Hunter and Magni are the main draws of this production , Blixen is an accomplished and prominent Danish writer with a following of her own, and a writer who attracts comparisons to The Arabian Nights in her perspective-and-shape-shifting narratives. Hunter plays Blixen as a syphilitic storytelling sorceress, staring into death with dignity and a morbid wit like an ageing Scheherazade. Telling us that coffee was invented to enable the telling of stories through the night, Hunter guides her audience as if around a campfire to hear four tales told with old-fashioned simplicity. 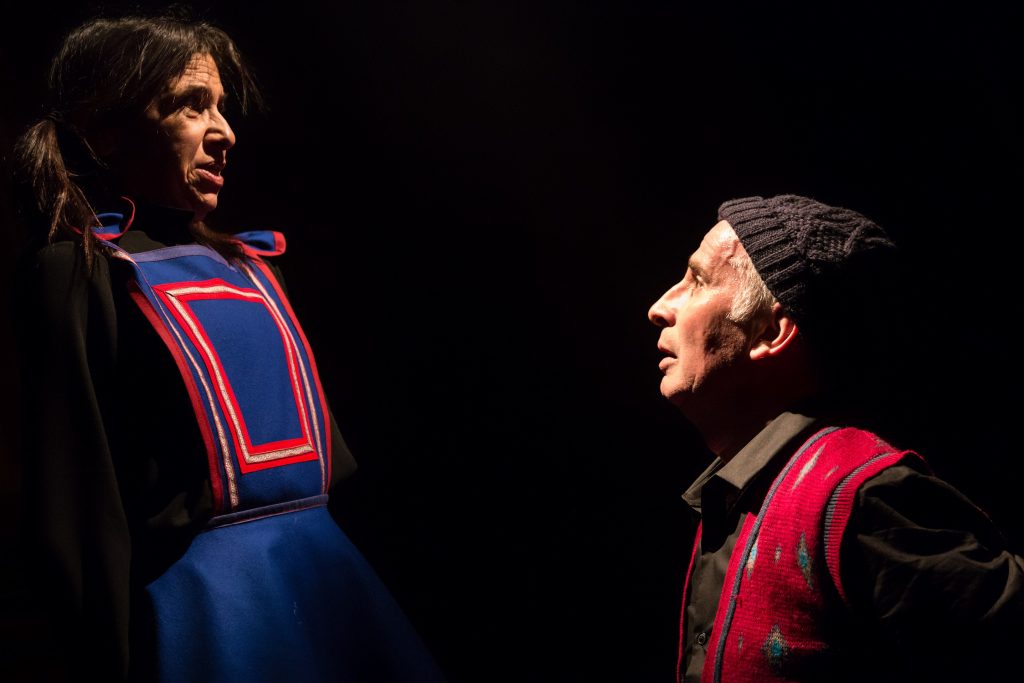 Kathryn Hunter and Marcello Magni in Out of Blixen

Whilst Hunter and Magni are known for their pioneering physical work, which is in force in Out of Blixen, here they make a compelling case for the voice as a vital theatrical tool in its own right. Theirs are voices which fill the air and our imaginations with it. Hunter is simply magnetic – her first speaking appearance, as young girl Nora, has the whole auditorium leaning forwards towards the 59-year old actress with wonder. She does not disappoint. Her turn as a tortoise-shell spectacled fish lecturer holding forth on the grace of fish-kind as compared to man is a triumph of Blixen’s invention and Hunter’s interpretation.

Not all of Out of Blixen is so well executed, however. The pacing is rarely perfect, a problem compounded by some clunky transitions and occasional lapses into leisurely narrative description. Some of the aerial features of the production often feel clumsily integrated into the production as a whole. These are disappointments because the production shows the capacity for creating moments of great beauty. As Riotous Company’s Artistic Director Mia Theil Have swings from silks and sings of the bittersweetness of dying for the one you love, we feel transported to the garden that the words alone could not evoke.

Incidentally, the Print Rooms at the Coronet might be the most beautiful theatre, architecturally, in London. For someone who has never visited before, and who has only ever associated it with whitewashing scandals, its interior is a real surprise. It is a Grade II listed building and an absolute treasure – all peeling walls, burnished gold, refitted seats that are either imitation cinema rows or the real deal. It is a curious mix of the old made new, and the new made old. An old patron of the theatre, from before it even was a theatre (this time around at least – the building has had several lives) told me it is important for a production to make use of the auditorium’s vivid colour. I have strong feelings about setting when it comes to theatre, and I think the Print Rooms are perfect for Hunter’s Out of Blixen – a ramshackle, sometimes melancholy production which brings to mind nothing so strongly as  peeling gold-painted plaster glamorously illuminated by a dying gaslight. 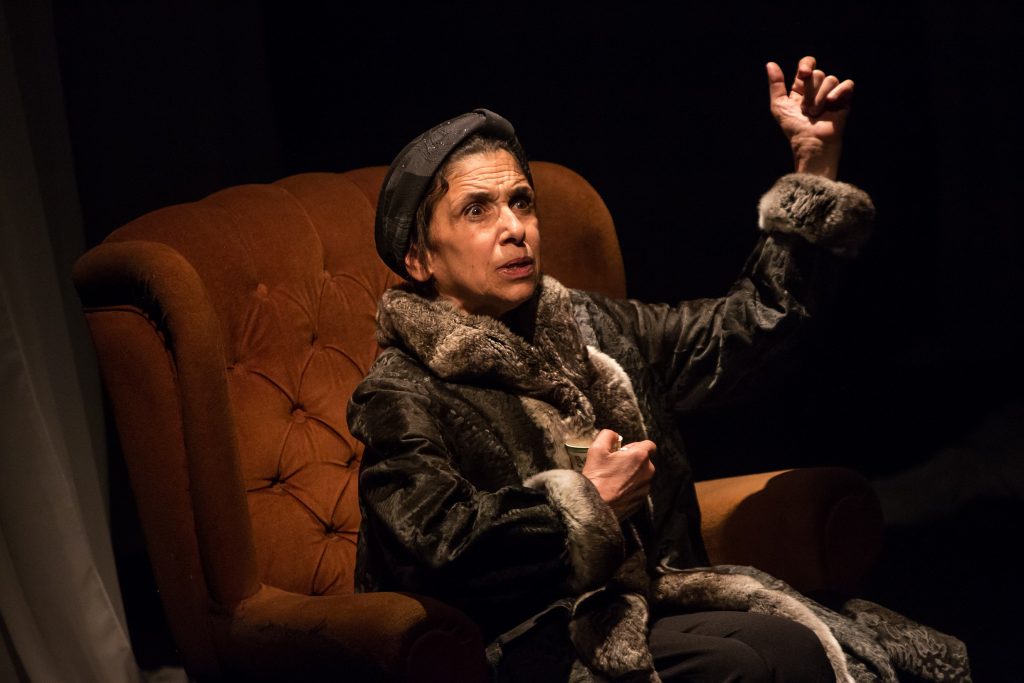 Kathryn Hunter in Out of Blixen

The fourth tale is spoken by Hunter, as Blixen, alone onstage. It is called “The Blank Page”, and at first it feels as though we will lose all the momentum gained by the previous episode’s denouement through yet more lengthy narrative description. But slowly the tale works its magic upon us – without a plot or really any characters to speak of – through merely Hunter’s voice and the riddle at the fable’s centre. This final tale somehow lingers under the skin longer than its more developed, but sometimes clumsily-executed counterparts. Here, the story stands for itself.

Hunter leaves her audience with no doubt of the scope and imagination of Blixen’s invention. But I am not convinced that the stage is the best medium for Blixen’s short stories, or even for the short story form as a whole. We are always left wanting a little more, a little unsatisfied, and hungry for another. But perhaps this is entirely appropriate – maybe it captures the appeal of a medium made for filling a long night with fictive dreams and a cup of coffee, and for keeping the morning’s axe at bay with calls for more of both.