Tom Stoppard’s Travesties has been getting some rave reviews during its West End billing, so we had a chat with star Amy Morgan about her role in the show.

1) It’s fair to say that Travesties has been a phenomenal success so far – rave reviews plus some superb sales and now the transfer until April – what part of the process have you enjoyed the most?

I always enjoy rehearsals the most I think. I always find the process fascinating; watching how other people work and building something together.

2) Patrick Marber has become one of theatre’s most beloved writer/directors – what was it like rehearsing with him and what part of the process did you enjoy most?

Oh Patrick is brilliant. I’ve worked with him twice before, so it was lovely knowing that rehearsals were going to be fun beforehand.  He’s an incredible man, he can do it all!! And he’s such a lovely guy. Always very supportive and encouraging. We have a great time!

3) Gwendolen’s character is formed largely through Stoppard’s toying with ideas of memory, as well as (of course) Oscar Wilde – how did this figure into the rehearsal process and later your performance?

It was tricky because in reality, she is Henry Carr’s (Tom Hollander’s characters) sister –  Sofia. But in Henrys head he’s mixed her up with Gwendolen, as he starred in a production of the Importance of Being Earnest in his youth. So I had to work out how to always convey the truth of the character in some pretty abstract situations. The limerick scene for example is a figment of his imagination, but if you don’t play real intentions then it all just becomes an exercise and the audience don’t connect. So just stick to the truth! Haha!

4) As one of Tom Stoppard’s classic shows, was he a large part of the rehearsal process? Did he provide an extra level of insight?

Tom was there from the very start! He was in my audition! Which was pretty daunting at first but like Patrick, he is a very gentle and encouraging man and was a constant source of knowledge and support. If you didn’t understand anything he was always around to ask. He’s a legend! 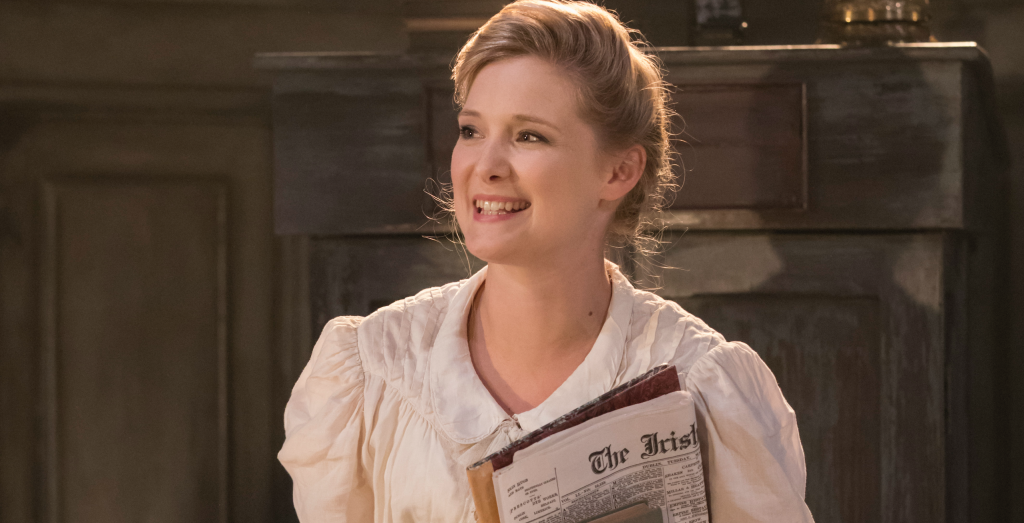 5) How is the transition from the Menier to the Apollo – does the central West End space provide new opportunities, or are there extra challenges?

It’s transferred very well I think. Originally we staged it with the audience on two sides but I actually think it plays better on a proscenium arch stage. The comedy certainly works better at the Apollo. But the Menier run offered a more intimate version of the play so the challenge has been to try to recreate that intimacy in a 700 seat auditorium. But Tom Hollander is genius and has phenomenal instincts and so it’s all gone quite smoothly!

6) How have the rest of the company been to perform with?

They are the dream!! Everyone is utterly brilliant – professionally and personally. We have lots of socials!!

7) It’s also fair to say you’ve had extensive screen experience – what does the stage, especially this show, offer that screen doesn’t always give?

Instant feedback. Especially with comedy. You do a scene and you know instantly from the audiences reaction how it’s going. With film, you’ve absolutely no idea and have no control over the final product. It’s all on the edit! The nature of theatre being live is very exciting and very scary and I imagine that is why so many TV and film stars usually come back to the stage at some point. There’s nothing quite like it.

Travesties at the Apollo Theatre runs until April 29th.