Review of: My Country; a work in progress at the National Theatre

A thought-voicing more than a thought-provoking play, My country is a journey through the emotions of a country.

Brexit has been a bizarre political occurrence, and a hazy one at every possible level. Not only are we still unsure about what the future will hold, but the referendum has also left us perplexed on the alleged unity of the United Kingdom. ‘Who are our neighbours who entertain such xenophobic views?’, a pro-Remain may say; ‘How can people be so blind, impractical, and naïve?’, a Brexiteer may wonder. The theatrical piece My Country; a work in progress aims to be a collation of what the real people thought.

The allegories of different parts of Britannia (Caledonia, The East Midlands, Northern Ireland, Cymru, The East Midlands, and The South West) jump on stage to give voice to the people of Britain before, during, and after the EU referendum. Meant to be the “spirits and hearts of their regions, and voice of their people”, the characters speak verbatim (and, most of the time, ‘accentatim’), with material gathered from interviews conducted by Poet Laureate Carol Ann Duffy and National Theatre director Rufus Norris.

The risk of staging caricatures or puppets is easily avoided by a talented cast, who manage to balance to perfection the audience’s laugher and reflection. Original texts by Carol Ann Duffy also prove eloquent and expressive, giving the verbatim piece a poetic frame. With dynamic stage movements and witty breaks of the fourth wall, the show sets out by getting the audience hooked. 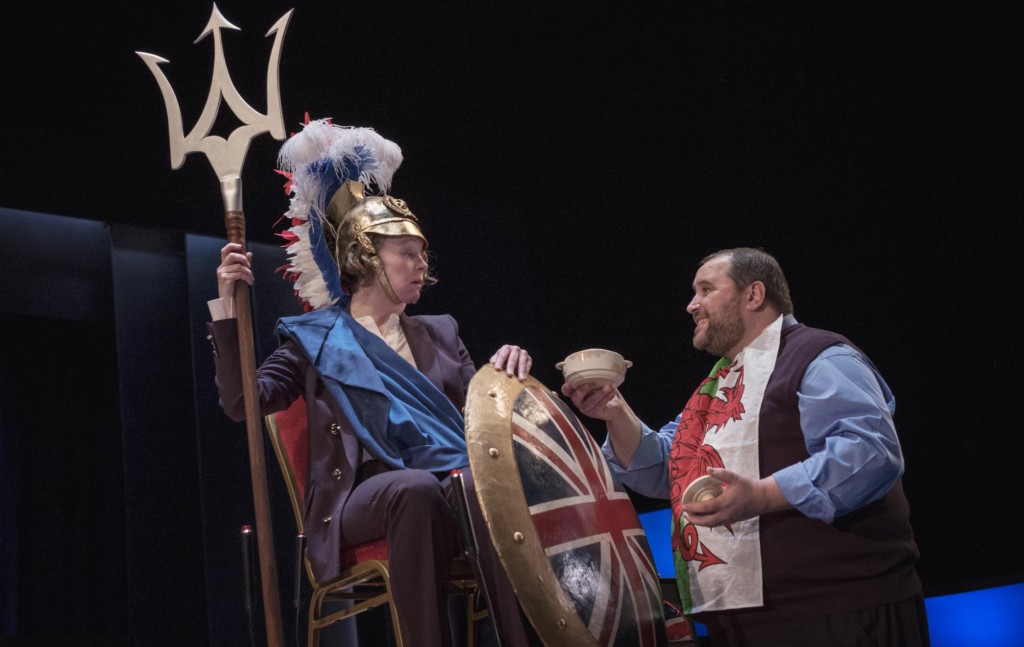 Devoid of the aspiration to trace back the roots of Brexit or to give a definite answer to what is going to happen, My country is a genuine work in progress, a snapshot of people’s opinions in a multifaceted country such as the United Kingdom. Particularly successful is the round-up of common places and arguments leading to Brexit. The series of motives surrounding the country’s decision is finally fleshed out in a clear (or clearer) way: from the money wasted by Brussels to the UK’s supposed self-sufficiency, from patriotist reasons to immigration and benefits. The wide range of social motivations is presented in an almost naturally-flowing way.

Perhaps less effective is the initial sequence, with people simply describing their personal circumstances. While it was meant to prove that (put poetically) “the seeds of our circumstances flower into our actions”, it might perhaps have been a bit more concise. At times, the pace seemed to slow down, and jokes that were funny in the beginning were reiterated to the point of losing their humour. Nevertheless, most of the show was engaging and compelling, with an overall architecture working extremely well.

A thought-voicing more than a thought-provoking play, My country is a journey through the emotions of a country, and an effective way to show how it is only through listening that the country can hope to overcome its present divisions.