Scratchworks Theatre Company are the four-strong physical theatre ensemble behind Nel – a personal highlight from the 2016 Edinburgh Fringe, which combined skillful onstage foley with puppetry and a distinct physical style to create a charmingly low-budget, highly inventive aesthetic. Scratchworks are bringing their show The Great Train Robbery  to the VAULTS Festival for its theatrical debut in the capital – although the show has toured extensively in a variety of unusual venues. Suitably enough, company founding member Alice Higginson met me in Victoria Train Station to talk about the company’s work and the fittingly idiosyncratic journey this show has taken. 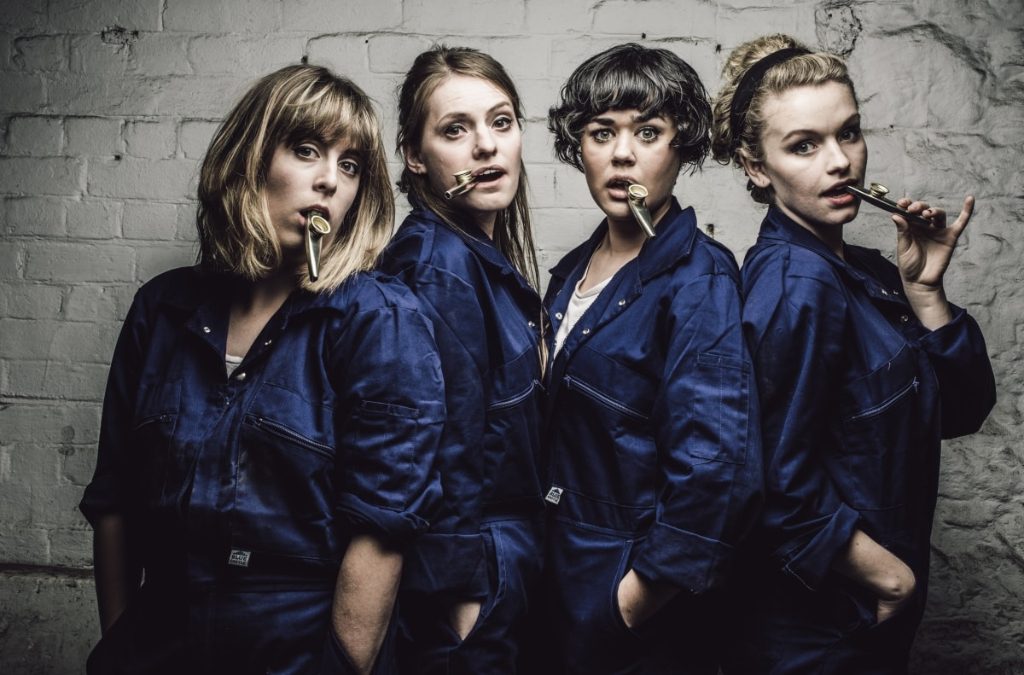 The Great Train Robbery is in some ways the logical continuation of Nel‘s playful exploration of storytelling through low-tech, practical effects. Developed in only two and a half weeks with the limitations of rural touring in mind, the show drew inspiration from the challenge to create a story with as little as possible. As Higginson puts it, “it’s a show that could go anywhere. Everything fits in a bucket.” Everything, that is, except for the four performers – a multi-talented bunch who recreate high-speed chases and all the hallmarks of a classic heist in their distinctive and highly visual comic style. So far, this winning formula has faced “deepest darkest Devon”, endured extensive rural touring and has even been performed in a hospital atrium in Waterloo.

The other major inspiration for Scratchworks was the historical narrative of the Great Train Robbery itself – and more importantly, its gaps. According to Higginson, “whilst we were working with some facts, our imaginations could run wild. There were four robbers that never got caught – and there’s four of us! We realised we could make these people whoever we like, and what happened to them whatever we liked.” In The Great Train Robbery, these missing thieves are four cleaning ladies who defy expectations and smash sexism in the sixties to become the only members of the gang still at large. Theatrically speaking, the story itself is a kind of gap, having never been explored on our stages – and certainly not as a parodic heist thriller subverting the storytelling tropes of the genre. For Scratchworks excel at creating irreverent genre pastiches accompanied by subtle social commentary. Their debut show, Fool’s Proof, was a screwball comedy that satirised sensationalism in the press. Nel, on the other hand, felt like a platonic romcom – perhaps the first ‘friendcom’ I have seen onstage.

Scratchworks Theatre emerged out of a 25-strong collective which earned the prize for Best Overall Body of Creative Work at the Edinburgh Fringe 2013, having begun to make work together at Exeter University – the same institution whose graduates include Punch Drunk Theatre and Forced Entertainment. However, whilst Scratchworks “were aware we were walking in the footsteps” of these illustrious predecessors, their journey has been made very much their own. Electing to stay in Exeter and build relationships with venues and audiences there, Scratchworks have made the transition from graduate to professional company whilst staying strict to their own rule of “let’s not work unless we can pay ourselves.”

When asked if they have any advice for new companies looking to follow in their footsteps, Higginson suggested “Make a show – if it’s great, then great. But it’s important to remember that no one sets out to create a bad show. You have to go through the process of making a show to figure out where your strengths lie and how you work as a team. You get through difficult moments, somehow, by solving problems and that’s where you learn who you are as a company.

You start to figure out a formula that works – even if the formula in essence is completely different every show. It’s also about finding what you’re not good at and trying it anyway.”