Review of: In Our Hands

In Our Hands plays on the safe side, and whilst this doesn't detract from how beautiful or whole the piece felt, it ultimately risks being overlooked in a festival where experimentation is often a key way to attract audiences

Developed in London and Cornwall, In Our Hands is the latest offering from award winning company Smoking Apples. Derived from on-site research in coastal town Newlyn, and through conversations with Cornish fisherman Stefan Glinski, the story follows Alf Hayward and his Catcher’s Fortune crew. Times are hard for the independent fisherman; catch prices are low, bills are piling high and his relationship with his son has suffered alongside his business – In Our Hands explores whether the two can overcome their family rift and make the fishing business successful again. 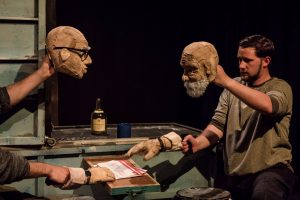 Told through a mixture of dislocated puppetry, object manipulation and physical theatre, the definitive high points of this show are its neat narrative and innovative design. Transporting us through clearly delineated worlds, wooden crates were reused to great effect as transformative set pieces that strongly supported the storyline. The ensemble’s object work was considered and, most importantly in a physical show, everything on the stage was necessary and had its place in the story. Particularly pleasing were the company’s clever play with micro and macro scales, from tiny rod fishing boats and torch work to oversized fish puppets. Jo Walker’s composition was also a masterly element, and complimented the themes and moods of the show perfectly.

The characters of father and son developed nuance across separate scenes, with motivations, fears and backstories fleshed out, but when they were brought together, their relationship seemed one dimensional, with binary exchanges that didn’t seem realistic or engender sympathy for our protagonist Alf. Similarly puppeteer Hattie Walker’s seagull sub plot, whilst beautifully designed and with flashes of great comedy, didn’t encourage sympathetic feelings for the character. Throughout the show, the fourth wall was very firmly in place, and there’s a resulting lack of connection with the audience at the emotional high points.

Whilst the narrative was exceptionally clear and powerfully concluded, I did find it was lacking somewhat in pace, and key moments failed to reach a dramatic climax. Because the speed of the show varied little, it felt like In Our Hands was playing on the safe side, and whilst this doesn’t detract from how beautiful or whole the piece felt, it ultimately risks being overlooked in a festival where experimentation is often a key way to attract audiences. The story matter is relevant and timely, but In Our Hands feels like a very traditional piece; in its next evolution, it would be interesting to see how the physical language could be pushed further.

In Our Hands will be continuing its run at the Underbelly Cowgate in Edinburgh until 29 August, with daily performances at 4pm. You can buy tickets from the Edinburgh Fringe Box Office here.