Review of: The Trial of Jane Fonda at the Park Theatre

The Trial of Jane Fonda is also a trial of American post-war consensus, a trial of the Nixon administration and the media's collusion in pro-military action in the late 1960s and early 1970s

Terry Jastrow’s The Trial of Jane Fonda has leapt wholeheartedly into a historical legacy that, for the United States, was entirely unprecedented. The fallout from the Vietnam war contains tricky, nuanced, and difficult sets of circumstances, those that, without significant expositional explanation, can often lead to paradoxical and unsatisfying conclusions. On top of this, Jane Fonda’s involvement within the war is a phenomenon that is equally bemusing – the actor visited Hanoi, actively spoke out against the war, and was even photographed laughing and smiling on a Vietnamese anti-aircraft gun. All of these meaty, weighty issues are left looming in Jastrow’s show, currently playing at the Park Theatre – and whilst incredibly informative, for the most part never feel coherently placed inside a dramatic and narrative context.

With Chilcott still somewhere in the political memory (though now distant, given the amount of international news recently), the Park certainly timed their performance, questioning the legitimacy of another controversial war, for maximum impact (something they seem to be incredibly good at doing). We open to six former servicemen years on from the end of the fall of Saigon, each aggrieved with Fonda and willing to meet her to discuss how far they disagree with her sentiments. From there the show plays out like a historical reconfiguration of 12 Angry Men (6 Angry Servicemen and One Hollywood Star?), which, given Fonda’s father being the well-reputed Henry, seems like an oddly fitting stylistic choice. Over the course of a lengthy hundred minutes, chairs are thrown, accounts are narrated and explanations are given. The show operates somewhere between a counselling session and a historical documentary. 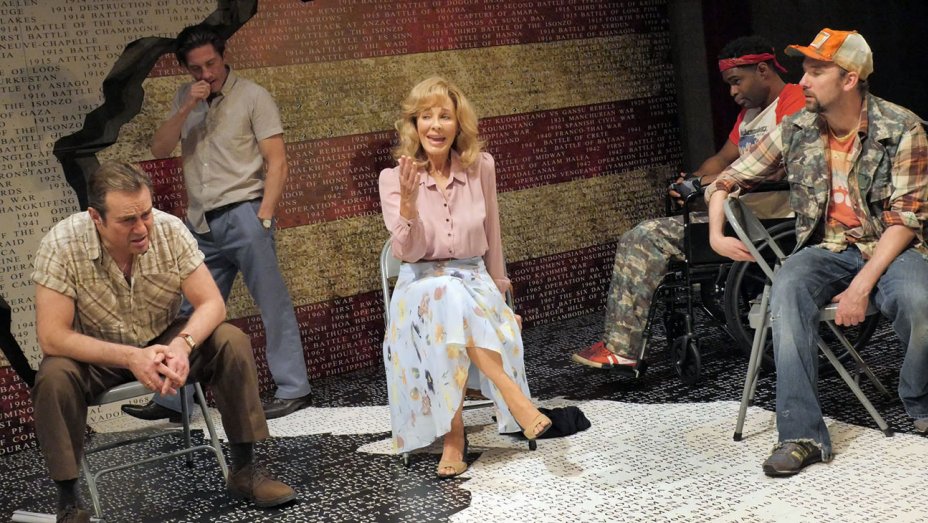 Given the huge volume of expositional information that had to be presented to the audience, the real loss here is the emotional weight that the soldiers and their accounts could bring to the table – fantastic performances from Ako Mitchell and Martin Fisher in particular break through and find some real juice, but for the most part this felt more informative than heartfelt. Anne Archer was a perfectly satisfying Jane Fonda, capable of levity and grace even in the face of masculine intimidation.  Sean Canavagh’s vast set is certainly a memorable one – eschewing any form of naturalism to construct a huge, hulking

For the most part, however, the show felt oddly distanced – the real character drama lost behind the weight and baggage of a historical era that needs to be carefully explored and considered. The Trial of Jane Fonda is also a trial of American post-war consensus, a trial of the Nixon administration and the media’s collusion in pro-military action in the late 1960s and early 1970s. But to ever condense such an ambitious amount into a cogent 100 minutes always felt like too much, and unfortunately it was the cast and narrative cogency that lost out in the exchange.

The Trial of Jane Fonda will run until the 20th August. More info here.