An utterly compelling one-woman show about being young, black, and teenage today

Writer and performer Urielle Klein-Mekongo is utterly compelling in a one-woman show based partially on her own experience of adolescence. Blending spoken word, music, and one versatile performance, Yvette is an exploration of what it means to be young, black, and teenage in today’s society. 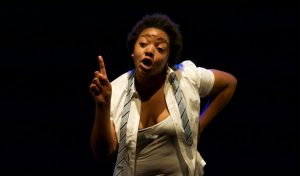 Yvette – Evie to her friends – is a fierce thirteen-year-old living with her mother on a London estate. Her main goal at present is to lose her virginity, preferably to her best mate Lewis and ideally via a JLS condom. Yvette trades heavily in teenage awkwardness: in a lovely sequence, Klein-Mekongo doubles over in the bath, straining to maneuver a bic razor beneath her dress. Later, after the show has taken a more sinister turn, that same bathtub is to become the scene of Evie’s desperate attempts to bleach out her blackness.

Klein-Mekongo shuttles as deftly between characters as means of telling her story. One moment she oozes sass as her no-nonsense mother, the next vulnerability in the rawest version of herself. Whether it’s via loop-pedalled phrases or inventive use of props, Yvette avoids simplistic storytelling. In a particularly striking moment towards the end of the piece, a man’s suit jacket is contorted to become a sinister second presence on Klein-Mekongo’s one-woman stage.

Yvette is not a polished show but it is an honest one. Klein-Mekongo wields complete credibility: as she speaks out about her guilt and inadequacy, it is easy to believe these stories are her own. The show ends on a note of empowerment, however, and it is then that the performance achieves its full urgency.