”Bare Essentials’ is NOT a scratch night” reads the blurb and you’d better believe it as Encompass Productions complete a week long showcase of writing at the Fringe Venue The Amersham Arms. With high quality acting and equally impressive directing panache, the showcase is budget-less yet not to its detriment. We do indeed have a set of ‘microplays’ that each make up small slices of an impressive cake. 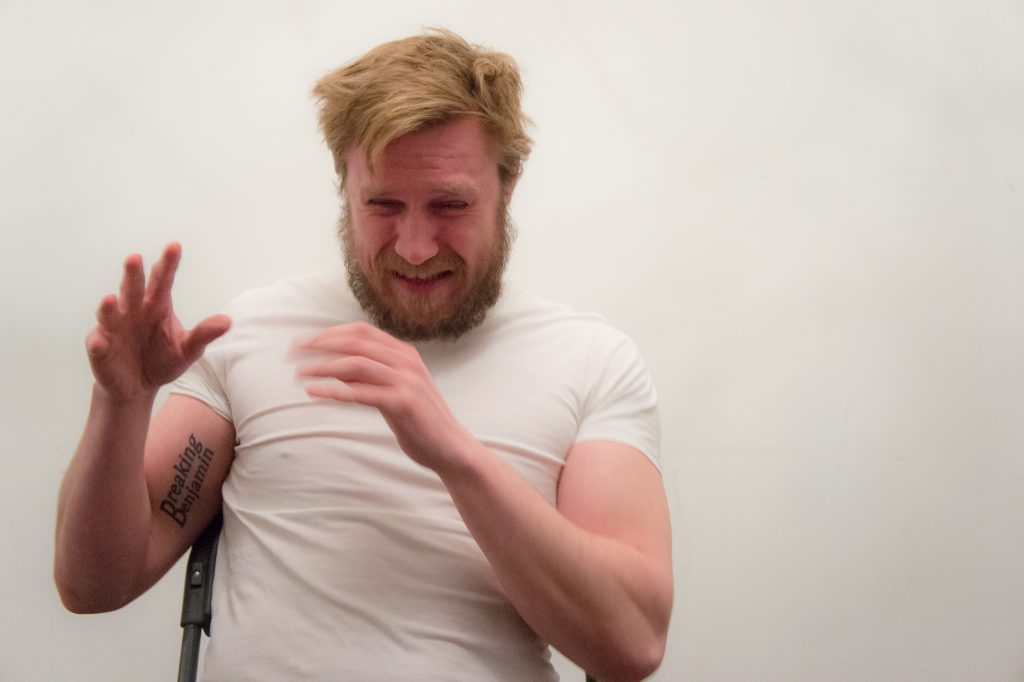 Friday night started with Build A Wall by American writer Cary Pepper, a veteran contributor to the Best American Short Plays series. Directed by Michaela Frances Neal and acted by Steven Mortimer and Pip Barclay, its emphasis is on tribalism, division and unity as two men build opposing parallel walls to ‘protect their stuff” from each other only, by the play’s end, to be joined in friendship through mutual hatred of an unseen ‘them’. We could be anywhere- Israel, 1960s Berlin, Northern Ireland- perhaps even Britain. The conceit is a gimmick but that doesn’t matter- and the slapstick acting employed by the actors, reminiscent of the film’s by Buster Keaton, gives the scenario an absurdist edge.

Letting Go by another American writer Rhea MacCallum, plonks straight into the world of naturalistic drama with emphatic acting by Alice Coles and Liz McMullen, who as two seemingly mentally abused sisters, are in outraged denial at their mother’s death and perhaps even life. Sharp writing in a play that could easily be seen on TV, it was directed by Annemarie Highmore.

I’ll Take a Dozen Accountants..with Sprinkles directed by Jonathan Woodhouse and Zuir Warren and written by Matt Hanf, sheds light on our increasing addiction to food- in this case the sexual allure of a talking doughnut in an office staff room. Performed by Alexander Pankhurst, Carly Halse and Jonathan Woodhouse, a typically repressed accountant is seduced into taking off his clothes and devouring the sugary dough as a balm to sexually repressed feelings. Like Build A Wall, the short play is structured around a gimmick but is a quick witted commentary on everyday unconsciousness displayed by the common man.

Friend Roulette by LGBT writer Adam Lowe, directed by Rachel Owens, sheds light on a gay friendship that is pushed by.. society? inhibitions? fear? into the confines of a chat room (Friend Roulette). But it could also be a comment on the real life  app, Grindr, where users meet for sex and chance encounters. The intensity of the meetings that can only be virtual and therefore ‘not real’ for one of the friends, played by Robert Wallis, causes him to break free for the real world, leaving his internet friend Jonathan Woodhouse, stuck in the hell of a darkened room.

The Maltese Walter,  directed by Katie Turner, returns to the US with writer John Minigan, is a quirky intelligent take on the Western World’s (at least) obsession with super heroes- increasingly the obsession of grown men- I work in a cinema so I know this  to be disturbingly true. Using film noir as its guiding structural device, there’s a lot of laughs as we watch shy Walter wrestle with his alter ego Noir Man. Tricked by his Woody Allen like therapist and robbed of his bride, there’s an actual serious commentary on how we treat those we consider to be mentally ill running behind the comedic moments.

Finally, we come to John Foster’s Little Boy,  directed by Liam Fleming, a brilliant monologue exposing the effects of PTSD and mental imbalance in a pilot partly responsible for dropping the Atomic bomb on Hiroshima. James Unsworth gives a first class performance as the tormented soldier as he wrestles with his guilt and memories – his own or imagined- of melting faces and burned bodies. It tackles the terror of a man who not only is weighed down by his guilt and driven psychotically mad by it, but also his isolation as his life falls apart. His worst terror is that others do nothing to help him by actualizing his guilt and acknowledging it-  instead they commit him to further hell by denying his experience. The most serious play of the evening Little Boy would not have gone amiss as a parallel piece to Grounded, a monologue about a Drone Pilot at the Gate Theatre in 2014.

All pieces showcased committed acting and directing in a portfolio which illustrates Encompass Productions’ dedication to new writing. The pieces are deliberately bare so that the writing is not intertextualised or layered by stage design or auteur directing. The actors and the directors step aside to reveal the skill of the play wrights.  And although it would have been wonderful to have had plays from outside the sphere of the Western World-  here predominantly the US and the UK- the writing was nevertheless, a breath of fresh air on the fringe circuit.