Review of: The Pit and the Pendulum

A Victorian gothic tale given a contemporary twist.

Running at the Omnibus Theatre in Clapham until November 24th is the Creation Theatre’s production of THE PIT AND THE PENDULUM. This production is clearly innovative and original in content and context. A production that demonstrates the collaborative creative talents of writers, performer and, importantly, technical partners who, with their artistic sound or sight designs, create an original and exciting platform to the unfolding gothic story, THE PIT AND THE PENDULUM. The story was voiced-over with some vocal dexterity by Nicholas Osmond. 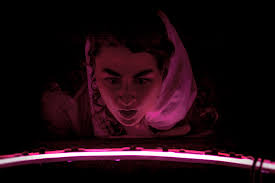 There is an abundance of Iranian and Islamic imagery in the design, as the woes of a political prisoner are narrated in parallel with this gothic story. Such woes in this modern tale of political and gender oppression are investigated and unleashed, sometimes in fragments, sometimes in diatribes. Actress Afsaneh Dehrouyeh’s delivery is quiet and intense, as she scrabbles around for an identity that is all too quickly slipping away when she wakes up to find herself confined and isolated in a dark unknown space.

The fusion of narratives is not always successful as the play meanders and deviates; absorbing ideas, thoughts and feelings. Some are spacious, whilst others are redundant or speculative – but all are given shape and drive by a slick technical production. The production’s values mask much of the extraneous banner waving as it allows for the exploration of sensory deprivation and long-term isolation through visual and auditory effects. The rambling mind might be a product of the experience but dramatically much of the narrative, often spoken in Arabic, excludes us and fails to impact in a verbal sense as the process itself so dominates with its soundscape (listened to on headphones throughout) along with its vibrant video and neon strip lighting designs.

The play is visually arresting but verbally cloying, not because the content was not attention-grabbing – certainly,hijab-wearing Muslim women and their rights to protest and fully participate in society is laudable – a rambling structure leaves much to be explored. Subsequently, it tends to allow the audience to be woeful observers and, rather than drawing empathy from the audience, a feeling of confusion persists as topics and ideas are raised but not dealt with.

It is an immersive theatrical experience and in a near pitch-black environment it serves to alert us to the mentally destabilising effect on the mind of captives whose cases never comes to light and whose outcomes are most certainly destined to be in an unmarked pit.

The fusing of both narratives jarred at times resulting in neither story being fully explored. However, for creativity and technical brio, this production is 4 stars as it delivers an intricate and well managed theatrical experience. As a coherent dramatic exploration of the character’s dilemma and options or an unravelling of her emotional journey, the play falls short. Afsaneh Dehrouyeh delivers a performance of conviction and the actress is nuanced and intense as she honestly explores this dark sad world that frighteningly seems all too topical. Certainly, she captured the elements of a gothic tale that were both evident and absorbing at times.

Creation Theatre is a theatre company on the rise with its original and thought provoking theatrical process certainly one to watch. Under the direction of Christopher the production was assured and inventive.