it cries and wails out

The story of hang seems over before it starts (this is a point because the story is not the point).  Character 3 walks into Jon Bausor’s execution chamber like set (which tremors and groans with Tim Mitchell’s electric spasms and Christopher Shutt’s white noise) having traversed a thrust  as if walking on death row herself, and declares she’s already decided what will happen to the man who committed a horrendous crime against her and whose manner of death she now gets to choose. Characters 1 & 2 dance around her (as government officials or agents for some futuristic corporation that runs a private service for victims of terrible crimes (Serco?), we never really find out) in a verbal spar : all we get from debbie tucker green is a sense of how all 3 characters are deterred, inarticulate and enclosed by the distinct inability of a language that is ‘corporatised’ and can no longer be relied upon to express our emotions or allow us to even if we want it to, which here, Character 3 definitely doesn’t. 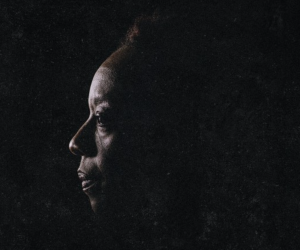 But this is not just a play about Capital Punishment, or an argument that is for or against it, and to think that it is or should be or is only, is to perhaps mistake the intention of the playwright. It is never questioned whether the punishment is appropriate, although what is discussed, with a hideous kind of enjoyment by 1, is the manner in which the unseen and unnamed man will die: emphasising, I am sure, a world which is obsessed with the protocol of things and how things should be done, rather than the end result, which is death. We are obsessed with ritual and so is debbie tucker green. Character 3 does not go on any transcending developmental journey. She is, proudly and loudly, a victim. Now another playwright said recently that it can be a bit limiting to write about victims, that not much can be done with them except empathise or have them transcend their situations and that they can suffer political demonisation. debbie tucker green, quite deliberately,  explores all of these problems and she does so unwaveringly, she does so with a woman who, whilst suffering the ramifications of an unnamed crime, is at the same time, difficult. She does not conform, happily so, to the stereotypical, disempowered female victim we might be used to seeing. What’s more, she is black and in Marianne Jean-Baptiste’s performance, carries all the abuse, all the injustices suffered and still are suffered by black men and women the world over. At least it seems so. It is there in her trembling and in the way in which she stands well clear and far away from 1 (Shane Zaza) & 2  (Claire Rushbrook) and uses her wit to bring them down. Intimidated by their deaf , institutionalised business like manner which hides its institutionalised cruelties, she is defensive, clear sightedly cruel and yet by degrees, blind. Surely debbie tucker green is exploring the unfortunate and terrible irony that traumas and grave human rights abuses can make the victim a terribly enlightened human being. But that it can also make them very, very angry, depressed and afraid. These are things that we might not like to think about. We like to think that victims are utterly innocent beings who remain so even after they have been abused, that even their trauma is manageable and innocent and warm and can’t possibly be cruel, and that they welcome our well intentioned if sometimes automatic compassion, with open arms. Not so, it is a great deal more complex than that.

hang then is also about a victim who starts to victimise others, as a self defence mechanism. 2 becomes a victim as 3 unrepentantly whittles away at her life and exposes 2 to her own immoral crimes, exposes her weaknesses by getting her to open up. On this battlefield, it is 1, whom 3 mocks, who finds some sort of common ground with her- shaky ground formed in the same morbid interest, although for different reasons, of how the man will die.

Whose death really are we talking about though? It seems too obvious to believe that really we are looking at 3’s death: death in all senses, the end of one type of suffering and the beginning of another for instance. Yet this is what this seems. Time and time again, under debbie tucker green’s direction, Jean-Baptiste positions herself between two chairs, as if about to go under the gallows herself. Time and time again, her reflection melts in the black crematorium like walls of the set, faceless, lacking in identity, almost gone. Time and time again, she puts off doing that thing that might instigate a change of mind: because to change’s one mind, after having clung onto an idea that supports a person’s very way of life, perhaps even protects it and becomes a lifeline therefore, is the biggest death of all.

debbie tucker green’s best work is always ambiguous. Random and her first film, Second Coming are both good examples of where meaning and truth defies definition: all we can safely say is that what we have is experience.

Why? Perhaps it is because the nature of truth can never be really got at, what it is can’t be quantified. debbie tucker green is not interested in a worldly truth that can be known by all, but in an individual truth that cannot be known by everyone, although its effects will certainly be experienced and perhaps by a lot of people.

Isn’t this the greatest trauma of our lives, this problem of knowing and feeling that can never be experienced by the other and yet is the only thing we wish to translate, to communicate?  This seems to be at the heart of so much of debbie tucker green’s work and it cries, it wails out.

In the end, to quote another great writer, Hanif Kureishi, there is only one subject for an artist, “What is the nature of human experience?” This seems to be, more than anything, the drive of debbie tucker green’s hang.