TLDR: Incoming Festival 2019 to head to Bristol, in addition to London and Manchester. 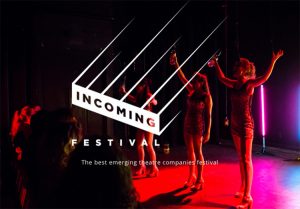 Incoming Festival for emerging theatre companies to head to Bristol for the first time. The festival will be in London and Manchester from 24th – 30th June 2019, and in Bristol from 26th – 30th June 2019. All tickets will remain at £5.

New Diorama Theatre and A Younger Theatre are today delighted to announce that in 2019, Incoming Festival will take place at the Tobacco Factory Theatre in Bristol, as well as HOME in Manchester and New Diorama in London.

Following five brilliant years at New Diorama in London, and a successful debut in Manchester in 2018, in 2019 Incoming Festival will take over the new studio theatre at the Tobacco Factory for five days in June.

Incoming Festival is a celebration of the best emerging theatre companies from the UK and beyond, and invites audiences to try something new for just a fiver. In previous years, the festival has featured companies including Bristol’s own Bucket Club and The Wardrobe Ensemble, Kill the Beast, Breach Theatre, The Pretend Men, Sleeping Trees, Footprint Theatre, Lost Watch, Silent Uproarand Kandinsky.

This year, in a radical shake-up of our programming model, we invited Lyn Gardner, Fergus Morgan (The Stage), the editorial team of Exeunt magazine and Critics of Colour to select the shows they would like to programme as part of the festival. The remaining slots will be programmed by co-directors David Byrne, Jake Orr and Eleanor Turney, and from the National Student Drama Festival. We will be announcing the full festival line-up in November, and tickets will go on sale in 2019.

New Diorama Theatre Artistic & Executive Director, David Byrne, says: “Incoming Festival is one of the very best things we do at New Diorama. It’s great we’re able to extend the festival’s reach even further to HOME and, now, Tobacco Factory, two of the very best theatres in the country.”

Incoming Festival co-director Jake Orr says “We’re thrilled to be bringing Incoming Festival to Bristol in 2019 and to be hosting it at the brand new Spielman Theatre at Tobacco Factory Theatres. It gives companies a third city to present their work and as Bristol has long been a thriving hub for emerging theatre companies, it feels the natural step for us to bring the best emerging companies from across the UK to the city in the festival’s sixth year.”