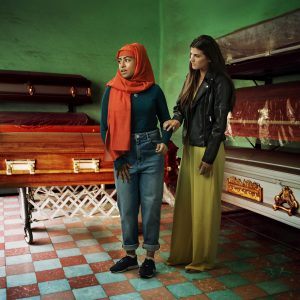 The Funeral Director, an exploration of a gay Muslim woman coming to terms with her identity, makes its world premiere in a four-week run at Southwark Playhouse opening on 2 November, with previews from 31 October; and running until 24 November.

This year’s Papatango New Writing Prize received a record-breaking number of submissions from across the UK and Ireland – 1,384. This means the Prize continues to attract more annual UK/Irish submissions than any other playwriting platform – and is unique in giving feedback to all entrants.

“I just thought it would be a secret I’d have to die with. And now – I think it’ll be what kills me.”

Life as the director of a Muslim funeral parlour isn’t always easy, but Ayesha has things pretty sorted. She and Zeyd share everything: a marriage, a business, a future. Until Tom walks in to organise his boyfriend’s funeral. A snap moral decision, informed by the values of Ayesha’s community and faith, has profound consequences. Forced to confront a secret she has hidden even from herself, Ayesha must decide who she is – no matter the cost.

The Funeral Director is an incisive and heartfelt story of sexuality, gender and religion in 21st-century Britain.

Iman Qureshi will make her full-length debut with The Funeral Director. Born in Pakistan and raised in Saudi Arabia, she has had short plays or limited runs commissioned or produced by Tamasha, Kalí Theatre, Purple Moon Drama and the BBC. As a member of Tamasha Playwrights and Soho Theatre’s Writers Lab her short play His and Hers was produced as part of Tamasha’s New Muslim Voices. Iman has also written for the Guardian, Independent, Time Out and the Huffington Post, been writer in residence at various schools, and been shortlisted for the Muslim Writer’s Award in 2011.